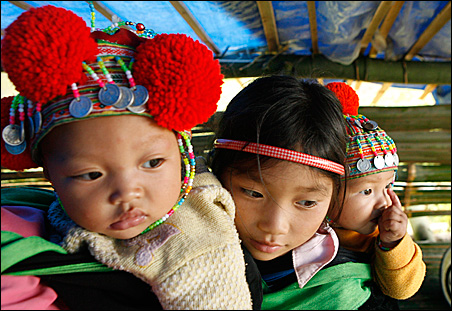 BOSTON — Children are living longer, according to a new study that shows global child mortality rates have dropped 35 percent over the past two decades.

An estimated 11.9 million children under age 5 died in 1990, compared with 7.7 million infant deaths in 2009, according to the Institute for Health Metrics and Evaluation (IHME) at the University of Washington, which released its report Sunday. But where the rest of the world is seeing fast improvements, the United States lags behind in reducing child deaths.

The 2009 total consists of 3.1 million deaths during birth, 2.3 million deaths in the first year, and 2.3 million deaths of children aged 1 year to 4 years. The study includes new data and increased accuracy from past estimates, said Julie Knoll Rajaratnam, the lead author of the study and assistant professor of Global Health.

Dr. Christopher Murray, IHME director and one of the paper’s co-authors, credited three reasons for the decline in mortality rates: improved maternal education; efforts to curb mother-to-child HIV/AIDS transmission; and increased childhood disease intervention, such as mosquito nets and drugs.

“IHME has found that the amount of spending on global health programs has shot up over the past 20 years to a total of more than $200 billion,” Dr. Murray said in an email response to questions from the Monitor. “The spending has funded childhood immunization programs, bed net distribution programs and antiretroviral drug programs to combat HIV/AIDS.”

The study shows that 31 developing countries are on pace to reduce child deaths by 66 percent in 2015 compared to 1990 levels.

Even countries with low childhood mortality rates to start with have continued to see mortality declines, according to the study. Singapore had a child mortality rate of 8 per 1,000 live births in 1990, but by 2010, that rate had dropped to 2, the lowest in the world.

Only Swaziland, Lesotho, Equatorial Guinea, and Antigua and Barbuda saw increases in child mortality between 1990 and 2010.

“Some high-income countries, including the United States, have seen an increase in health disparities across racial and economic groups,” Dr. Murray says. “You can see the effects of this especially in newborns, where high quality obstetrical care is crucial. Globally, about 40 percent of all deaths of children under 5 happen in newborns. In the US, about 60 percent of all child deaths are newborns.”