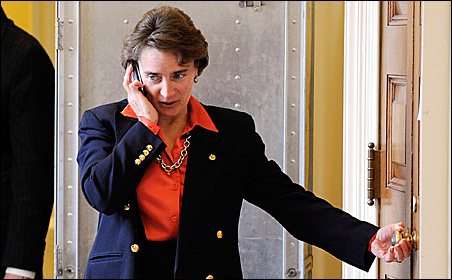 WASHINGTON — Whatever the outcome of today’s primary elections, this year’s outlook for many US congressional incumbents can be summed up in one word: peril.

How bad is it? This bad: Only about 20 percent of Americans approve of the job Congress is doing, according to a Gallup poll released May 14.

Independent voters are even more scathing in their judgment than are voters overall. Only 13 percent of this swing group rate Congress favorably, according to Gallup.

But it’s easy to disapprove of Capitol Hill in general. What about voters’ attitudes toward their own members of Congress? That’s a measure that is usually more positive. It’s tougher to be negative about someone whose face you know – and whose efforts to land federal funds have probably been covered in local media.

Well, maybe that individual approval rating usually is sunnier, but this year, it’s not. In April, another Gallup survey found only 49 percent of voters in favor of reelecting their own member of Congress.

“This marks only the second time since Gallup began asking this question in 1992 that the figure has dipped below 50 percent, and the first on the doorstep of a midterm election,” wrote Gallup researcher Lydia Saad in an analysis of the poll data.

Anti-incumbent sentiment could be pivotal in today’s votes. In Arkansas, for instance, Sen. Blanche Lincoln (D) is facing a tough primary challenge from Lt. Gov. Bill Halter. Senator Lincoln has been criticized by liberals for being unsupportive of the White House, among other things. Liberal groups have poured cash and volunteers into Mr. Halter’s campaign.

In Pennsylvania, venerable Sen. Arlen Specter (D) is trying to maintain his grip on a seat he’s held for 30 years. Senator Specter has been a fixture of Pennsylvania politics so long that his picture might be used to illustrate the word “incumbent” in the dictionary. But for most of his time in office, Specter was a Republican. Like his colleague Lincoln, Specter has encountered a spirited challenge from the left. His opponent, Rep. Joe Sestak, has tried to turn Specter’s experience against him, emphasizing what he calls a continuing need for change in Washington.

Voters today are in such an anti-incumbent mood that even if Lincoln and Specter survive today’s primaries (and that’s a big “if,” particularly in Specter’s case), they would have an uphill climb to victory in November.

Right now, Arkansas looks almost certain to fall into the GOP column in November, as it is a generally Republican-leaning state in what is shaping up to be a strong Republican year. Currently, there is a 92 percent chance that Lincoln’s seat will be won by the GOP, judges polling analyst Nate Silver on his blog FiveThirtyEight.com.

Republicans are favored to win Pennsylvania, too: There’s a 71 percent chance of a GOP takeover in that state, according to Mr. Silver.

Other Senate incumbents who have more than a 50 percent chance of unemployment in November, according to Silver’s number crunching, include Senate majority leader Harry Reid of Nevada and Sen. Michael Bennet (D) of Colorado.

Given today’s voter anger, Democrats should lose their current control of the House and Senate, right? They are the incumbent party, after all.

Right now, many political handicappers don’t think that will be the case. Given the pattern of open seats and vulnerable incumbents, Democrats should suffer a net loss of seven Senate seats and 27 House seats, according to predictions made by Larry Sabato, director of the University of Virginia’s Center for Politics in Charlottesville.

Such losses would leave Democrats in control of both chambers – barely.

Then again, November is still a long way away.

“Voters’ anti-incumbent mood is like nothing Gallup has seen in the past four midterm election cycles. While that could have a negative impact on incumbents from both parties, the greater exposure of the Democrats by virtue of their majority status means greater risk for their candidates,” wrote Ms. Saad of Gallup in April.