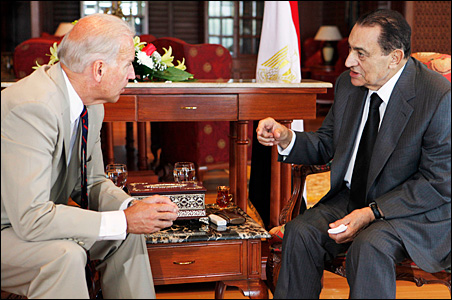 CAIRO — After meeting President Hosni Mubarak in Egypt Monday, Vice President Joe Biden said the US is looking for new ways to handle the situation in Gaza.

“We are consulting closely with Egypt, as well as our other partners, on new ways to address the humanitarian, economic, security, and political aspects of the situation in Gaza,” Mr. Biden said after the meeting, according to a statement released by the White House.

Biden also used his visit to press Egypt to keep the US-sponsored proximity talks with Israelis and Palestinians alive, and said progress toward direct negotiations is vital. “The status quo is unsustainable for all sides,” he said.

But while Biden praised Egypt’s “leadership and support,” the US has little to show for relying on its key Mideast ally to push US policy in the region. Egypt, without the regional heft it once had, has been unable to deliver Palestinian reconciliation, and has been weakened by its participation in the Israeli blockade. It now faces intense internal and regional pressure from Egyptians angry about the blockade and resurgent regional powers who see an opening in Egypt’s failures.

“The Egyptians have always been able to muddle through these crises,” says Steven Cook, senior fellow for Middle Eastern studies at the Council on Foreign Relations. “But this is a critical moment and the political pressure is building.”

Analyst: US not looking to overhaul Israel blockade
Biden’s visit comes amid the fallout from Israel’s fatal raid on the ‘Freedom Flotilla’ that tried last week to break the three-year-old blockade on Gaza. The raid, during which nine activists were killed, provoked outrage in the Muslim world. It has also prompted the US to reconsider the tenability of Israel’s policy of keeping Gaza closed to all but a trickle of humanitarian aid – a policy Egypt has largely supported, to the chagrin of many of its citizens.

Tens of thousands of Egyptians protested Israel’s raid on the flotilla Friday, reportedly chanting slogans in support of Hamas, an offshoot of the Muslim Brotherhood, Egypt’s largest opposition group.

Egypt has helped Israel keep Gaza’s borders largely closed since Hamas seized control of the territory in 2007 in an effort to weaken the Islamist group. In an effort to relieve some of the pressure, Mr. Mubarak ordered the border at Rafah opened indefinitely on Tuesday, and thousands of Palestinians have since crossed into Egypt.

Dr. Cook says Biden’s comments on Gaza likely mean the US will try to ensure that more aid is allowed into the Palestinian territory, rather than an entire rethinking of the blockade strategy. Biden, who was sympathetic to Israel’s security concerns in a recent Tel Aviv speech, said last week that Israel has the right to stop ships headed to Gaza.

“The administration has accepted the Israeli and Egyptian position on this,” says Cook. “They’re going to try to work with the Israelis about how things can go into Gaza without undermining Israeli security.”

Biden, Mubarak on same page
Those measures might include easing the blockade on Egypt’s side, but Egypt’s move last week has not radically changed the situation for Gazans.

The Rafah crossing is used primarily for the passage of persons, not goods, and only students or those seeking medical treatment are generally allowed to cross the border. While some trucks carrying aid including tents, generators, and wheelchairs were allowed to cross into Gaza, Egypt has refused a request from a physicians’ union to send supplies into the Palestinian territory.

Emad Gad, an analyst at the government-financed Al Ahram Center for Political and Strategic Studies, said Mubarak is largely on the same page as Biden.

“Frankly speaking, I think Egypt is understanding the Israeli point of view on this issue,” he says. “So that is why Egypt criticized Israeli action but Israel didn’t take the decision to recall the Egyptian ambassador from Tel Aviv.”

Government-linked newspapers, Mr. Gad says, have muted their criticism of the flotilla raid because Egypt is wary of the flotilla activists, whom it fears are close to Hamas.

Biden skates over democracy issue
Biden also touched on an issue that activists say has been largely absent from the US agenda in Egypt recently: improving the climate for democracy. Biden said the US “looks forward to a continuing dialogue” with Egypt on political reform.

“Elements such as respect for human rights and the need to continue working for a vibrant civil society and more open political competition are vital for Egypt to remain strong and serve as a model to the region,” he said.

He did not mention the reports of widespread irregularities in parliamentary elections here last week. Gad says the issue of democracy promotion and free elections has taken a back burner to Palestinian mediation and peace talks.

The Obama administration has avoided pushing publicly for democratic reform in Egypt, which the Bush administration did in 2004-05 before backing off. One year after President Obama’s historic speech to the Muslim world from Cairo, many are disillusioned by his failure to deliver on promises of a “new beginning.”

Since Obama took office, the US has cut aid for Egyptian democracy promotion by half, and has agreed to send aid only to those nongovernmental organizations (NGOs) approved by the Egyptian government. Egypt is now seeking an endowment for US aid that would remove congressional oversight from the largess and keep the US from using it as a tool to apply leverage for democratic reform.

Biden was originally scheduled to visit in March, but the trip was delayed when Mubarak underwent surgery in Germany. Biden will also visit Kenya and South Africa this week.