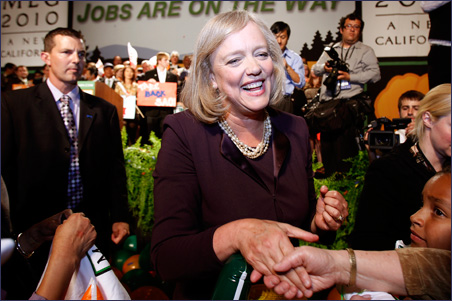 WASHINGTON — If there’s anything certain about this election cycle, it’s that nothing is certain.

Pundits had all but written off two-term Sen. Blanche Lincoln of Arkansas in her tough Democratic primary runoff Tuesday against Lt. Gov. Bill Halter – with state insiders predicting a defeat by up to 10 percentage points. Such a loss would have fit the prevailing narrative of anti-Washington, anti-incumbent anger that has already cost two senators – Arlen Specter (D) of Pennsylvania and Bob Bennett (R) of Utah – and two House members their jobs.

But Senator Lincoln defied election-eve polls and a furious onslaught from progressive groups like Moveon.org and major labor unions to beat Lieutenant Governor Halter, 52 to 47 percent. She had strong support from native son and former President Bill Clinton, who campaigned heavily for her and was featured prominently in her ads. Lincoln’s centrist positions – particularly her opposition to a “public option” in health-care reform – had alienated party liberals, while more conservative forces in the state have lashed her to President Obama, who is not popular in Arkansas. Her surprise victory showed that polling for a low-turnout primary runoff can be notoriously unreliable.

In her victory speech Tuesday night, Lincoln sought to align herself with her home state in the eyes of voters.

Lincoln now faces an even tougher battle against five-term Rep. John Boozman (R) in November, when anti-incumbent feeling – mostly against Democrats – is still expected to dominate. The latest Washington Post poll shows only 26 percent of Americans approve of Congress’ performance, a worse rating than in 1994, when the GOP took control of Congress for the first time in 40 years.

South Carolina Republicans gave state Rep. Nikki Haley 49 percent of the vote in a wild four-person race for the state’s gubernatorial nomination; she faces Rep. Gresham Barrett (R), who came in second with 22 percent of the vote, in a runoff June 22 and is favored to win. Ms. Haley is the first Indian-American elected to office in South Carolina and would be the state’s first woman governor. Charges of marital infidelity, which she fervently denied, seemed to engender sympathy for her and build momentum toward victory. A state senator’s use of a racial slur against her also didn’t hurt.

‘Tea party’ shows strength in Nevada
In Nevada, the small-government, low-tax “tea party” movement scored its second big primary win of the season with the GOP’s nomination of Sharron Angle, a former member of the Nevada Assembly. Ms. Angle is now positioned as the potential giant-killer of the 2010 cycle, as she goes up against Senate majority leader Harry Reid (D) of Nevada.

Senator Reid has long been considered one of the most vulnerable incumbents, with dismal poll numbers in his home state. But Reid’s camp is now voicing hope that the embattled leader may survive after all, given Angle’s hard-line views in favor of limited government, which include support for privatization of Social Security and closing the US Department of Education. Democrats are calling her a more extreme version of Rand Paul, the libertarian-leaning tea party favorite, who won the GOP nomination for Senate in Kentucky.

Republican women on the rise
Tuesday’s results showed that it’s a new day for Republican women, who have long lagged behind their Democratic sisters in elective office. Of the 17 women in the 100-seat US Senate, only three are Republicans. In the House, 73 of 435 members are women, and of those, only 17 are Republican. Six states currently have women governors, three of them Republican. Former Alaska Gov. Sarah Palin (R), the first woman vice presidential nominee for her party, has carved out a role as a champion of conservative Republican women. Her endorsements of Fiorina in California and Haley in South Carolina are seen as having helped both women break away in polls and go on to beat their male opponents.