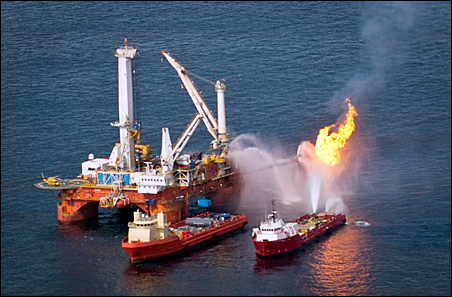 REUTERS/Lee Celano
Water is sprayed onto burning natural gas at the source of the Deepwater Horizon oil spill in the Gulf of Mexico on Saturday.

BP’s public relations gaffes in the Gulf oil spill are continuing, with Chief Executive Tony Hayward attending a yacht race in England Saturday. But on the sea floor, the company is making important headway toward containing all the leaking oil.

The Obama administration has forced BP to ramp up its oil-containment efforts, and President Obama has staked a fair bit of credibility on BP’s success. He claimed in his Oval Office speech that BP would collect 90 percent of the oil by the end of the month.

So far, BP’s redoubled efforts appear to be working.

BP collected a record 25,000 barrels of oil (1 million gallons) on Thursday. Previously, it had been collecting only about 15,000 barrels a day.

This puts BP on track to collect about 50,000 barrels a day by the end of the month. The best available scientific estimates suggest that between 35,000 and 60,000 barrels of oil are gushing from the wellhead.

By mid-July, BP expects to have enough processing capacity on site to collect 80,000 barrels of oil. Containing the oil is now considered the best option until relief wells to plug the leaking well are finished in August.

A glitch
The success did not come without a setback, though. A problem on the larger of the two ships collecting the oil, the Discoverer Enterprise, forced BP to shut down oil collection on that ship Friday. A valve that prevents oil from catching fire became clogged.

The problem has now been fixed and BP says it collected 21,000 barrels of oil Saturday. That number suggests BP is proceding cautiously. With the assets currently available, BP can now collect as many as 28,000 barrels of oil a day.

The Discoverer Enteprise, which has been on site for weeks, can process about 18,000 barrels of oil a day. On Thursday, a second vessel, the Q4000, joined the effort, adding about 10,000 barrels a day of processing capacity.

Unlike the Discoverer Enterprise, the Q4000 is not drawing oil from the containment cap installed early this month when BP sheared off the riser pipe. It is getting its oil from a valve on the side of the blowout preventer that had previously been used to pump in drilling mud during the failed “top kill” operation. Now that “choke line” valve is being used in the opposite way, siphoning oil to the Q4000.

BP had been concerned that “junk” shot into the blowout preventer during the latter stages of the “top kill” might clog the choke line. The fact that it is working as hoped is a major boost for BP.

The Q4000, however, can’t store oil as the Enterprise does, so it is burning off all the oil it collects.

The next step
By the end of the month, another ship like the Q4000 – either the Toisa Pisces or the Helix Producer – is scheduled to arrive on site. It, too, will connect to a valve on the side of the blowout preventer – the “kill line” – and burn off the oil it collects. Its capacity is expected to be about 25,000 barrels a day.

That would bring BP’s daily capacity to 50,000 barrels daily.

A second large ship, the Discoverer Clear Leader, is expected to arrive on site in mid-July. That could increase capacity to 80,000 barrels daily, which would collect virtually all the oil, barring small leaks.

BP is, in many respects, scrambling to solve a containment problem of its own design. For weeks, BP refused all efforts to try to get a firmer grip on the flow rate of oil from the well, using an estimate of 5,000 barrels (420,000 gallons) a day. Now, the plans made on that estimate are inadequate, and BP is rushing to conatin tens of thousands of barrels of oil still leaking into the Gulf daily.