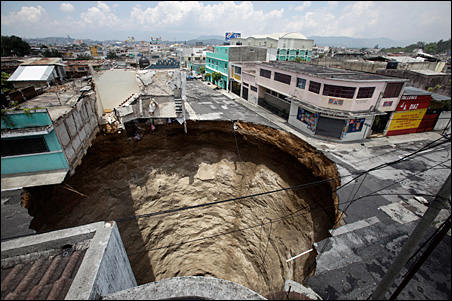 REUTERS/Daniel LeClair
A giant sinkhole caused by the rains of tropical storm Agatha is seen in Guatemala City on Tuesday.

SANTO DOMINGO, DOMINICAN REPUBLIC — From the air, the giant Guatemala City sinkhole appears so perfectly round and deep that photos of it almost look doctored.

Up close on the ground, “the only way to describe is to say it’s huge,” says David de Leon, the spokesman for the country’s disaster response agency, CONRED, who was reached by phone. “It doesn’t seem real.”

Rains from Tropical Storm Agatha opened the sinkhole in the residential zone 2 of downtown Guatemala City on Saturday night. CONRED estimates it is 100 feet deep and 65 feet across.

“I’ve been to the site and I think it must be bigger than that,” says Mariela Castañón, a reporter for the daily newspaper La Hora.

Hole swallows building, telephone poles
Neighbors told Ms. Castañón that the ground collapsed suddenly, taking a three-story house that was used as a factory, and a security guard with it. Authorities said they could not confirm the security guard’s death. He’s listed as missing.

As the hole opened “it sucked in electricity poles and the neighbors around there were left without electricity,” she says.

The country’s human rights ombudsman said 300 people living near the sinkhole were in danger and he pledged to investigate what caused it to open.

More than 178 people throughout Central America have been killed by landslides, flooding, and sinkholes since Agatha lashed the region with three feet of rain in some places. In Guatemala alone, nearly 152 people died and scores more are missing. Tens of thousands are still in emergency shelters and entire remote regions are cut off after landslides blocked dozens of roads and bridges.

Guatemala’s international airport, however, reopened Tuesday after being closed for days following the eruption of the Pacaya volcano last week. That will help facilitate the arrival of international aid in the wake of the disaster.

Sewer system led to collapse?
CONRED geologists say that sewer or municipal water lines might have eroded the ground and led to the collapse.

They are studying the stability of the ground around the hole to determine how many people will need to be evacuated.

The disaster agency will then turn the job over to Guatemala City officials who will determine how to deal with it.

“It make look like it’s impossible to fix, but we’ve done it before,” says de Leon.

Sinkhole in ’07
In 2007, three people were killed when a 100-foot deep sinkhole opened in another Guatemala City neighborhood. More than 1,000 people were evacuated from the area.

Sinkholes are commonly found in areas where the bedrock is limestone, or some other rock that can be dissolved by ground water, according to the US Geological Survey.

As the rock dissolves, huge cavities are formed. And when there is nothing left to support the land surface, it collapses, forming the sinkhole.

Authorities are treating the site like a crime scene. The area is cordoned off 60 feet in every direction, de Leon says.

Meanwhile, residents living near the hole told Castañón that “they don’t know whether to stay or evacuate. CONRED hasn’t told them what to do.”

Guatemala City sinkhole so big, so round it ‘doesn’t seem real’