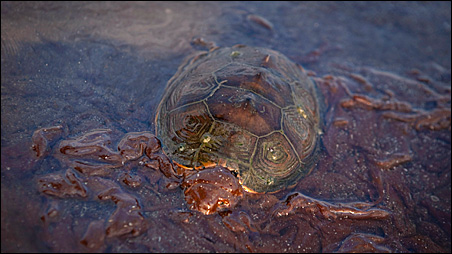 REUTERS/Lee Celano
A sea turtle is mired in oil from the Deepwater Horizon oil spill on Grand Terre Island, Louisiana.

PENSACOLA BEACH, Fla. — A sunbathing family spots a beached baby dolphin covered in oil from the Gulf oil spill. The family tries to scrape off the oil until a wildlife officer, jaw hard-set, carries it to shore. On its way to a sea mammal rescue center in Panama City, the dolphin dies.

Many dead animals could be sinking before being discovered in the vast Gulf. Autopsies of those found are usually inconclusive, because toxins are quickly metabolized by animal tissue. And the Gulf has long had its own set of environmental problems.

Recent reports of massive fish kills in Florida and Louisiana, for example, could simply be part of normal events that come with the heat, algae growth, and cyclical events in the deep strata of the Gulf and that starve some Gulf waters of oxygen.

“There is a lot of evidence that over years with no oil spills there have been massive die-offs in the Gulf,” says Thomas Shirley, a marine biologist at Texas A&M University in Corpus Christi. “But that’s not saying the well isn’t having any effect on what we’re seeing now.”

Along the Gulf, observers have reported fish acting peculiarly as the oil spill moves closer to shore, with sharks and rays bunching against beaches. Usually plentiful, porpoises have been missing from the Intracoastal Waterway in the past few days as the oil spill has moved ashore along miles of beaches in Florida’s Escambia County near Perdido Key.

In the deep sea, sail fish, turtles, and crabs congregate around mats of sargassum, a floating seaweed. Predators often search the trailers, or strand line, of the sargassum for food. From beneath the surface, patches of slick could look to pelagic fish and turtles like strand lines, drawing the creatures closer.

When oil-soaked, however, those sargassum are pulled within booming structures and set on fire.

Deepwater Horizon Unified Command reported on Thursday that 240,000 barrels of oil (10 million gallons) have been burned at sea in hundreds of “burn boxes” spread out over the spill’s surface.

Boat captain Mike Ellis described what he had seen at sea in a YouTube report. “They drag a boom between two shrimp boats and whatever gets caught between the two boats, they circle it up and catch it on fire. Once the turtles are in there, they can’t get out,” Mr. Ellis said.

Shirley confirmed those reports. “We know it’s happening, and it’s a bad thing, but I don’t know any other solution” to getting rid of the oil, he says.

The importance of an accurate total

Indeed, simply leaving oil on the surface – even far out at sea – can harm other animals, like porpoises, who breathe in “this stuff … where they break for air,” says Shirley, adding that it is directly toxic.

The oil can have an indirect knock-on effect, too. Scientists reported this week that nearly 50 turtles had died after getting caught in shrimp nets and dragged on the bottom — most likely in the days before about one-third of federal Gulf waters were closed to fishing and fishermen were racing to make money.

Animal rescue teams have notched some significant successes. This week, agents released 62 cleaned-up pelicans and a northern gannet at the Aransas National Wildlife Refuge on the Texas coast – the largest such release to date.

The wildlife toll so far pales in comparison with that of the Exxon Valdez, where at least 35,000 sea birds died. In the Gulf oil spill, that number is only about 1,000 — primarily because the spill is 50 miles from shore and a mile deep.

But determining the number of animals killed and the cause of death is important. Federal laws makes BP liable for up to $50,000 per dead animal on the endangered species list, such as a Kemp’s Ridley turtle.