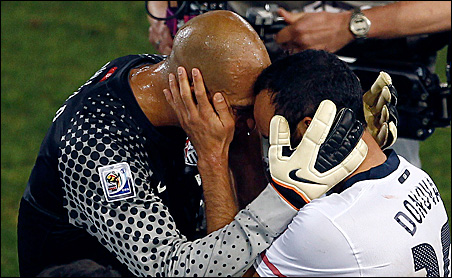 Koman Coulibaly, you are forgiven.

In fact, it was better that you mysteriously disallowed a perfectly good – and potentially decisive – US goal in the Slovenia game. We’ll send you a slice of apple pie on July 4.

Because now, who but the most churlish of American soccer critics can say that it is impossible for a 1-0 game to be exciting?

Who would have preferred any ending to this – Landon Donovan sending the journalists who have so often wielded their pens like knives against the game of soccer scurrying to the Thesaurus in search of adjectives for “epic,” “remarkable,” and “heroic”?

The USA defeated Algeria, 1-0, Wednesday in the World Cup.

The mere fact that this sentence is sending a frisson through the American people is, in itself, extraordinary.

More extraordinary still is that the excitement is rooted not solely in national pride – the swelling of the US vs. them verve that made USA soccer a passing fad in 1994. It comes also from the way this team is playing.

On one of the biggest nights in American soccer history – and perhaps the biggest – the USA at last played as if it belonged. More than that. As if it deserved.

This is one of the curious things about soccer. Invariably, at least one post-match interview will include this quote: “We deserved to win today.”

In any other sport such a comment is so self-evident that it is never said. The team that scores more points deserves to win. But for 90+1 minutes of USA vs. Algeria, America came to appreciate the full meaning of that sentiment.

One game before, Algeria had made mighty England look pedestrian and uninspired. Against the Americans, Algeria often looked as though it was being dangled over a pool of sharks by its feet.

Through 90 minutes, the USA had carved out six clear chances, the Algerians one. The Americans moved across the pitch with purpose and invention, repeatedly opening holes in the Algerians disciplined defense and then powering into them, as though Patton had drawn up the pregame battle plan.

Jozy Altidore was the tank, blasting his way through the Algerian defense. Clint Dempsey bombarded the Algerian goal again and again. Michael Bradley, commanding the midfield, filled the role of spike-shoed general.

Several times, all that was left of the Algerian defense was shrapnel, goo, and the American inability to finish any of the chances it created. And the one it did finish, of course, was ruled out by an offside decision – though it was clearly legal.

That, then, was going to be the story of this World Cup. A team denied by two poor refereeing decisions and its own inability to overcome them.

But, as a nation watched the time ebb away, this was not the moment for a lesson in soccer heartbreak – that the deserving team doesn’t always win, that World Cup teams must convert their chances.

Like trees falling in forests, nobody would have cared to hear the apologists bleating that this, really, was another step forward for US soccer. That the performance, of itself, was a life preserver even in a sea of disappointment.

The performance warranted a goal. It deserved a goal.

Fittingly, when it came, it was a product of patience and determination. Donovan feeding a lovely ball to Altidore in the slot, who took his defender wide and crossed for Dempsey, whose shot was (yet again) foiled, only for Donovan to dispatch the rebound – the simplest of finishes to a game that required all the fortitude the USA could muster.

As the final whistle came, historical accomplishments fell on the Americans like a garland of South African flowers.

It is hardly job done for the USA.

Making it to the knockout phase was always the minimum definition of success for this team. But now that they have done it – and, perhaps more important, how they have done it – the accomplishment seems something a little more worthy of celebration.

The team deserves it.