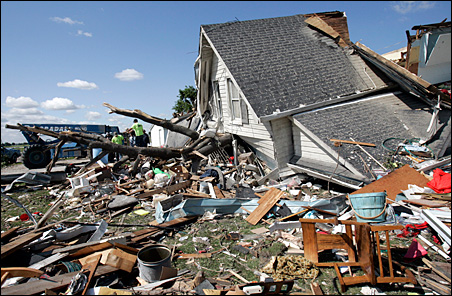 REUTERS/Rebecca Cook
A work crew removes debris from a farmhouse that was destroyed by a tornado in Lake Township, Ohio, on June 6.

With the 2010 US tornado season in full swing, scientists are diving into a treasure trove of data gathered during VORTEX 2 – the largest tornado research project ever undertaken.

The ultimate goal of the project, which ended last week, is to increase warning times while reducing the false-alarm rate, says Joshua Wurman, president of the non-profit Center for Severe Weather Research in Boulder, Colo., and one of the project’s lead scientists.

“Right now, we have an average 13-minute warning with a 70 percent false-alarm rate,” Dr. Wurman says. “If VORTEX 2 can get us up to 15 or 18 minutes, that’s still a substantial improvement. That’s a lot of extra time for people to seek shelter. And if you can get the false alarm rate down to 60 percent or 50 percent, people will have a lot more confidence that when a warning is issued, it really means business.”

At a cursory level, it might seem as though the main beneficiaries of advanced warnings are people who live in “tornado alley,” a broad swath of the Great Plains that runs north from central Texas into eastern South Dakota and western Iowa.

Data on tornado locations gathered between 1953 and 2004 by the National Oceanic and Atmospheric Administration’s National Climate Data Center in Asheville, N.C., however, show that every state and territory save for Alaska and Puerto Rico has experienced twisters.

On Sunday, for instance, Billings, Mont., took a direct hit from a tornado that destroyed a vacant arena that the day before held 7,000 people watching an Indoor Football League game, according to press reports. Several commercial buildings were flattened. For all the damage, estimated in the millions of dollars, no casualties have been reported.

The tornado appeared so suddenly that the local National Weather Service reportedly issued its warning shortly after local storm spotters called in the twister. On average, the state experiences seven tornadoes a year.

This year alone, tornadoes have appeared as far outside of tornado alley as California, Washington, the Carolinas, and the Bahamas. Earlier this month, preliminary reports indicate tornadoes touched down in northern Vermont, New Hampshire, and Maine.

Indeed, while the United States carries the dubious distinction of being the tornado capital of the world – with tornado alley as the Capitol rotunda – researchers have identified a range of tornadically active regions in the world. Southern Africa, where some researchers argue the most intense thunderstorms on the planet occur, is on the list, as are Australia, China, and portions of southern Argentina.

At least two major ingredients are needed to form the powerful “supercell” thunderstorms that spawn tornadoes: warm, moist air at the surface, and a dramatic change in wind speed or direction at higher altitudes.

As the warm air rises into colder air masses, its moisture condenses into water droplets and ice crystals that form towering thunderheads.

Meanwhile the difference in wind direction or speed sets up a rolling mass of air at the boundary between the moving layers – a bit like rolling a paper-towel tube between two hands.

If the rising air from the building storm cloud moves through this vortex, the updraft in effect stands the vortex on its end, imparting rotation to the whole storm cloud.

That sets up the environment in which tornadoes can form.

From there, things get tricky. One of the enduring questions scientists have been trying to answer is why some of these severe thunderstorms generate tornadoes and others don’t.

One of the lessons from the VORTEX 1 tornado study, which took place 15 years ago, was that the problem of understanding tornado formation “was a lot harder than we thought” going into the project, says Wurman, who also participated in VORTEX 1.

He points to storm-cloud rotation as an example. “There were a lot of supercells that had rotation at mid levels and even low levels, but a lot of them still didn’t make tornadoes.”

On the other hand, the researchers encountered what might be called the Goldilocks benchmark for the kind of cloud temperatures that encourage tornado formation.

The scientists knew that cold temperatures in the clouds were important for a tornado to form, but the team found that storms were more likely to be too cold to form tornadoes than earlier modeling studies suggested, says Harold Brooks, a researcher at the National Severe Storms Laboratory in Norman, Okla.

“Cold air is still important,” he says. “But it’s real easy for storms to be too cold.”

Those cloud temperatures could then be factored into decisions on whether to issue tornado watches as a severe thunderstorm approached.

After that trait appeared, “there were some storms that weren’t warned on that might have been warned on before,” he says.

VORTEX 2, which took place in May and June of 2009, and again in May and June of this year, has also turned up some interesting traits in storms that generated tornadoes. But it’s too early to tell whether the common traits are important or merely coincidence, Wurman says.

With the project just ended, “my team is basically spending this week inventorying the many terabytes of data that just my group has. We’re making sure we have back-ups, we have all the data, we haven’t left something on a thumb drive somewhere,” he says.

Questions of which storms are most likely to generate tornadoes have also worked their way into discussions of global warming’s potential effect on the formation of severe thunderstorms over the US.

Three years ago, Dr. Del Genio and colleagues at the GISS modeled the potential effect of temperature and moisture increases that could result if carbon dioxide concentrations reach twice preindustrial levels.

The results suggest that while the number of severe storms is unlikely to change, the proportion of the most severe storms could increase.

Last year, a team led by Robert Trapp, a climate scientist at Purdue University, found via a modeling exercise that the number of severe storms is likely to increase in the US under so-called business-as-usual carbon-dioxide emissions scenarios. But the increase varies by region.

Neither study says anything about tornadoes, which appear on scales too small for models to simulate – and based on field studies so far, they grow out of fewer supercell thunderstorms than scientists once thought.

From a climatological perspective, “there is not yet observational evidence that tornadoes have increased in the United States over the 20tH century,” Del Genio cautions.

Tornado reports themselves have increased dramatically over that period, he notes, but that spike can be attributed to improved detection and more people moving into areas where tornadoes once spun harmlessly, he says.

Moreover, he says, trends show a decrease over time in the number of the most severe tornadoes.