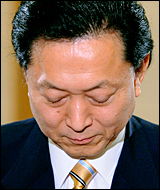 TOKYO — When Japan’s next prime minister takes office following Yukio Hatoyama’s resignation announcement on Wednesday, he will be the 15th occupant of the office in the past 21 years.

Take the unusually long tenure of Junichiro Koizumi (2001-2006) out of the equation, and 13 prime ministers have lasted a total of 16 years.

Mr. Hatoyama himself was the fourth consecutive leader who failed to last even a year in the job. For all the hopes of meaningful change borne in last year’s historic election victory by his opposition Democratic Party of Japan (DPJ), to many it now looks like simply more of the same: another scion of a powerful political dynasty who turned out not to have the mettle to handle the pressures of the nation’s highest office.

The strength of Japan’s political dynasties is a major driver in the almost annual procession of weak, mostly forgettable figures in and out of the country’s highest office. Because many politicians inherit their positions, they are not forced to cultivate leadership skills or learn to win popular support.

Out of touch?
The Japanese refer to the sons of the rich as obo-chan – and it’s a phrase that’s been thrown at the most recent quartet of short-lived prime ministers, who many felt were out of touch with ordinary people.

“I voted for Hatoyama, and still support the DPJ, but he turned out to be obo-chan, too,” says Hitomi Mizune, a small-business owner in Tokyo.

“The problem is that they don’t gather public support and then become leaders. They inherit their constituencies from their families,” she continues, referring to the common practice of political fiefdoms being handed down generation after generation.

When Hatoyama defeated then-Prime Minister Taro Aso’s Liberal Democratic Party (LDP) last summer, ending more than half a century of nearly uninterrupted rule, much was made of the fact that both men’s grandfathers had been political rivals in the LDP’s formative postwar years.

“The electorate has changed rapidly over the last few decades, and the political parties are still essentially stuck in the old fashioned status quo of the bureaucrats-politicians-business trinity governing,” says Takashi Inoguchi, professor emeritus at the University of Tokyo.

“The thing that attracts the most focus, though, is the lack of leadership shown by recent prime ministers,” he says.

Media shapes public opinion
Leadership – or lack thereof – has become a recurring theme in the media as one prime minister after another has found his popularity diving to untenable levels.

In recent years the press has “shifted focus from prime minister’s policy to the issue of leadership,” says Professor Tetsuro Kato of Waseda University in Tokyo. “The media has a huge role in building up and knocking down prime ministers,” he says.

Japanese newspapers in particular, whose journalists work closely together in press clubs, often speak with one voice on major issues. Reporters from different newspapers will compare notes after press conferences and events, deciding on a common angle, in a process known as memo awase.

Once the press has decided a prime minister has been indecisive or wavered on an issue, the criticism will be unified, and relentless. And their viewpoint has broad influence: Japan has some of the highest newspaper readership on the planet – seven of the world’s 10 largest papers by circulation are Japanese – and 90 percent of Japanese polled say they trust what’s written in them.

Ratings plummeted
During Hatoyama’s eight months in office, the press corps became increasingly hostile toward him, as did public opinion, particularly after he appeared to go back on his commitment to move a controversial US Marine base off Okinawa island. Though he entered office on a wave of optimism last September with 70 percent approval, by the end of May his ratings dropped below 20 percent.

Hatoyama’s likely successor, Finance Minister Naoto Kan, has the advantage of not having inherited political power, as well as a positive reputation for battling bureaucratic cover-ups and being a straight talker. He also has an infamously short temper, which could hurt him at the daily press conferences he’ll be expected to attend.