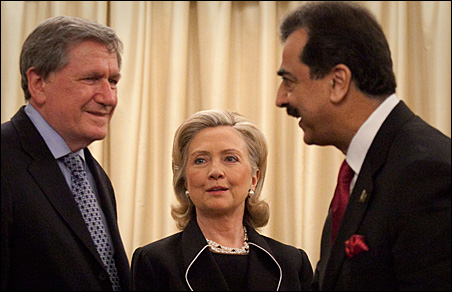 NEW DELHI — United States Secretary of State Hillary Clinton met with Pakistani leaders today in Islamabad in an effort to shore up relations with a country vital to peace negotiations in Afghanistan.

Mrs. Clinton’s Pakistan visit – which includes the announcement of $500 million in US funding for new projects aimed at improving water, energy, agriculture, and health in Pakistan – comes directly before her attendance at this week’s Kabul Conference, a meeting of 60 countries interested in Afghanistan that starts Tuesday. The summit has been billed as a chance for the international community to ratify parameters for talks between the Afghan government and Taliban leaders.

But Pakistan specialists say Clinton’s visit to Islamabad will go beyond negotiating tactics ahead of the conference. Of larger importance is moving the relationship beyond requests to squash Taliban havens to a common understanding of how to wind down the conflict safely.

“The presence of Clinton is a recognition of the vital strategic importance of Pakistan in the process of trying to secure Afghanistan and the region,” says Michael Semple, a top expert on the Taliban, from Islamabad. “I think they are probably looking more broadly than just trying to set up political talks or get the Taliban into a political deal.”

Let’s understand one another better
Indeed, Clinton’s deputies have spoken to the press about the need for changes in understanding more than concrete actions.

“Nothing could be more important to the resolution of the war in Afghanistan than a common understanding between Afghanistan and Pakistan on what their strategic purpose is,” said Clinton’s special envoy, Richard Holbrooke, last week.

Toward that end, Islamabad announced today it had reached a consensus with Kabul over a transit deal that would allow Afghan goods to flow by air and land across Pakistan to India. The agreement is one-way only at this point: Indian goods aren’t allowed to make the reverse journey, according to Pakistani press reports.

The trade accord “shows a goodwill gesture on the part of Pakistan” toward the US efforts to improve Afghanistan-Pakistan ties, says Hassan Askari Rizvi, a Pakistan-based analyst.

US loosens up obsession with militants
Insurgent groups operating in Afghanistan rely on havens on Pakistani territory, and experts say Islamabad can exert some influence on the insurgency. The US has tried for years to get Pakistan to attack the militant centers, but the bilateral relationship is moving off that point.

“I think there’s been a realization that it is not going to happen. Pakistan’s interests are permanent, enduring, and structurally determinant,” says Christine Fair, a regional expert at Georgetown University in Washington, D.C.

The American focus now is shifting toward shaping the role Pakistan might play in a political reconciliation process in Afghanistan between the government and the Taliban.

That’s not to say that Pakistan – after failing to deliver war on the Afghan insurgents – will be able to single-handedly deliver peace with them.

“Of course [the Pakistanis] are a major influence over what the insurgency does. But there is real content and meaning to the insurgency as well. Nobody goes and blows himself up just because the ISI [Pakistan’s intelligence agency] tells him to do so,” Mr. Semple says.

The notion that Pakistan can “deliver the insurgents like dialing up a pizza” is absurd, he adds.

Pakistanis also take a more nuanced view
Some Pakistanis are starting to take a more sophisticated view of the challenges posed by an eventual US withdrawal from Afghanistan.

“The question for the Pakistanis comes down to their internal security and how the situation in Afghanistan plays out here,” Ms. Fair says.

Some Pakistanis, she says, still view an American withdrawal as a chance to turn the clock back to 2000, when Pakistan enjoyed broad influence in a relatively stable Kabul. In this view, the Taliban will return to power easily in Kabul and militants inside Pakistan will stop fighting Islamabad.

But, she says, “there’s more recognition by astute observers here that there will be an unstable Afghanistan, and Pakistan has no other choice but to manage it.”

That could mean working with the Americans on stabilizing the situation – perhaps through negotiated settlements – so that a US drawdown doesn’t intensify the conflict.