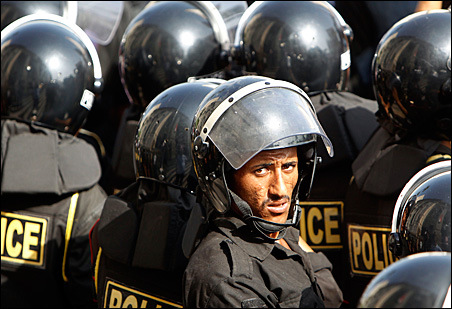 REUTERS/Amr Abdallah Dalsh
Egyptian riot police stand guard outside the court on Tuesday where the trial of policemen Awad Suleiman and Mahmoud Salah is taking place.

CAIRO — Two policemen stood trial in Alexandria today in the case of an Egyptian businessman whose death ignited protests across Egypt against the brutality and torture that pervades the police and security forces here.

Khalid Said died in Alexandria in June after, according to witnesses, the two policemen beat him to death on the street. The government said two autopsies show he died of asphyxiation after swallowing a packet of marijuana, but graphic pictures of his body circulated on social networking sites support the witness accounts.

In what activists say is a signal that the government is unlikely to challenge the culture of impunity that pervades Egypt’s security forces, the two policemen – Awad Ismail Soliman and Mahmoud Salah Amin – are not charged with causing Mr. Said’s death. They are instead accused of unlawful arrest and excessive use of force.

Lawyers for Said’s family asked the judge in court today to change the charge to murder, and the judge adjourned the trial until Sept. 25. Hafez Abu Saeda, director of the Egyptian Organization for Human Rights and one of the family’s attorneys, says the outcome will be pivotal.

“If we succeed in that, I think this will be the turning point. If not, I think [torture and brutality] will be the normal and systematic practice and they will consider all the pressure of the public nothing,” says Mr. Saeda. “This will be a message to the police officers: You are protected from any punishment, you are free to do what you want to do.”

What is unusual about Said’s case
Brutality at the hands of police and security forces is common in Egypt. Some blame part of it on the emergency law, in place for nearly three decades, which allows police to arrest people without charge and detain them indefinitely.

This is not the first time policemen have been charged for abuses, but the few who are convicted are typically given light sentences. Said was reportedly targeted for a video he had posted online showing police dividing the spoils of a drug bust.

Since Said’s death, demonstrations have taken place nearly every week. Some that attracted more than 1,000 people in Alexandria were broken up by security forces, and protesters arrested.

What is unusual about Said’s case is not that he was brutally killed at the hands of police, but that his case has attracted such attention – domestically as well as internationally. The EU issued a statement on the case that particularly riled Egyptian officials.

“The anger had to be contained one way or the other. And so the message is, ‘We’re doing what we should be doing,’” says Dr. Dawla. “But the people involved were not all indicted, the officers were not indicted, the issue of torture was not brought up.”

While that public pressure may have spurred the government to put the policemen on trial, it did not cause a change in police methods. At least two Egyptians have died at the hands of police since Said’s death, says Dawla.