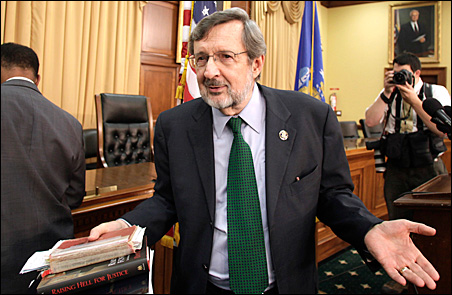 REUTERS/Yuri Gripas
Rep. David Obey initially proposed $23 billion for teachers, but had to pare it back to $10 billion after protests from fiscal conservatives in the House Democratic caucus.

WASHINGTON — So, what do public school teachers and US forces in wars in Iraq and Afghanistan have in common? Answer: a defense supplemental spending bill that is having an unusually tough time getting through Congress this summer.

If there’s one point on which Democrats and Republicans typically agree, it’s that funding for US forces in wartime is must-pass legislation, no question. But this year’s war funding bill is tied up, possibly for weeks, in a tangle of disputes between Democrats and Republicans, complicated by a late-breaking rift between House Democrats, the Obama administration, and one of the most loyal segments of the Democratic base – public school teachers.

Any one of these disputes would take careful negotiation, but together they add up to a tough balancing act for a Congress that is also facing midterm elections.

There’s broad, bipartisan support for the $58.8 billion the Senate approved on May 27 to fund the wars in Iraq and Afghanistan ($37.1 billion), Vietnam veterans exposed to Agent Orange ($13.4 billion), Haiti earthquake relief ($2.9 billion), the Gulf oil spill ($162 million), and other disaster relief.

At issue is the $22 billion in additional spending that the House added to the Senate bill on July 1, including $10 billion to hire teachers or prevent widespread teacher layoffs this fall, $5 billion to cover an expected shortfall in Pell grants for college students, and $700 million for border security.

Obey vs. the White House
Rep. David Obey (D) of Wisconsin, who chairs the House Appropriations Committee, initially proposed $23 billion for teachers. But he had to pare it back to $10 billion after protests from fiscal conservatives in the House Democratic caucus.

Then the White House balked at Mr. Obey’s plans to cover most of the cost by rescinding funds from President Obama’s signature $4 billion “Race to the Top” initiative, which gives Education Secretary Arne Duncan broad discretion to reward school programs deemed progressive. The White House threatened to veto the bill unless the House found another way to pay for teacher aid.

“With this bill from the Senate, we will be spending in this fiscal year $167 billion on the war in Iraq and Afghanistan,” Obey said in floor debate on the bill on July 1. “It is obvious to any but the most obtuse that that expenditure is killing our ability to finance a recovery of our own economy.”

Despite White House opposition, the additional spending passed the House 239 to 182. Fifteen Democrats joined all but three Republicans in opposing the measure.

Now, Senate Democrats are looking for offsets to propose to pay for additional spending and get around a threatened White House veto. Senate Republicans, who met with Secretary of Defense Robert Gates at their caucus luncheon on Tuesday, propose that the additional funding be eliminated altogether.

“I’m not going to quote Secretary Gates, but I can tell you that the principal thing he emphasized we already knew, which was that we need to get this supplemental appropriations bill for the troops passed,” said Senate Republican leader Mitch McConnell in a briefing with reporters after Tuesday’s luncheon.

Meanwhile, the nation’s teachers unions, which convened for annual meetings during the past two weekends, say the additional $10 billion is critical to avoid draconian job cuts this fall, and that much more is needed.

Teachers lose patience with Obama
The $789 billion stimulus plan that Congress passed in the first year of the Obama administration included $100 billion to help education. Now, that money is phasing out and the economy continues to falter.

“We thought that the initial bill of $23 billion was what was needed; it’s now been cut to $10 billion,” says Randy Weingarten, president of the American Federation of Teachers.

Given the need, the White House threat to veto the funding is not welcome, she adds. “What you’re seeing is state and local governments having excruciatingly hard times because of the continuing weakness in the economy, and teachers being stretched to the limit. There was no serious sacrifice on the part of the [Obama] administration.”

The National Education Association – at 3.2 million members, the largest teachers union – is also critical of the Obama administration’s education policy, which it says has amplified many of the accountability measures and sanctions developed by the George W. Bush administration.

“Plain and simple – this is not the change I hoped for,” said NEA President Dennis Van Roekel in a fiery keynote speech on July 3. “Our members feel betrayed and so do I. Our members are angry. So am I.”

On July 4, NEA delegates cast an unusual vote of no-confidence in the Department of Education’s Race to the Top guidelines. The vote was close, says a NEA staff spokesman, and surprising, given the strong support that teachers unions provided the Obama presidential campaign.