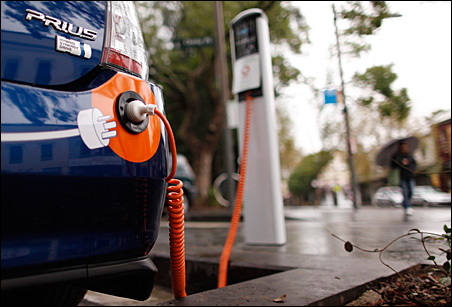 NEW YORK — For New York City Mayor Michael Bloomberg, it was a “the-chicken-or-the-egg” type of question: Do you build charging stations for electric vehicles so people buy energy-efficient cars or do you wait until they buy the cars and then provide a place for them to recharge their car batteries?

On Wednesday, Mr. Bloomberg answered the question by opening the city’s first electric-vehicle charging station at a commercial parking lot, adding some spark to a nationwide push to boost infrastructure for electric cars.

“We want New York to be prepared when people start buying them,” said Bloomberg, who is the architect of an ambitious program to reduce the city’s carbon footprint.

New York will be joining such cities as San Francisco, Austin, and Detroit in installing battery charging facilities for the public. The US Department of Energy (DOE), as part of the economic stimulus package, is providing much of the funding for many of the new sites. On Thursday, President Obama will take part in the groundbreaking for an advanced vehicle battery factory in Holland, Mich., to highlight the changes taking place in the auto industry.

New York’s chargers will be installed by Coulomb Technologies, a Campbell, Ca.-based firm, which received $15 million from DOE and another $22 million in matching funds from other sources to provide charging stations in nine metro areas.

The company’s CEO, Richard Lowenthal, says he hopes to have 5,000 of them installed by October 2011.

However, officials admitted the actual number of jobs created by the program will be relatively modest. Mr. Lowenthal said for every charging unit installed, three people go to work for a day – one person to build it and two to install it.

In New York, they will be installed in public parking lots so cars can be recharged while people work. They’ll also be placed in private garages, such as those under apartment buildings. Lowenthal says he expects to install as many as 200 to 300 in New York.

“If you want one, go on our website and request one,” says Lowenthal.

Forty chargers will be installed a city-owned facilities. New York plans to use them on its growing collection of electric cars and hybrids. The city now has 6,000 such green vehicles in its fleet, Bloomberg said.

Coulomb will also be installing a charging unit at a mid-town Manhattan Hertz, which plans to lease Nissan’s LEAF electric car as part of its green collection.

Bloomberg said that a totally depleted battery would take four to five hours to charge. While that sounds like it could be an expensive electric bill, Lowenthal estimates electric vehicles would cost about 2 cents a mile to operate compared to 14 cents a mile for a gasoline engine.

Will the mayor himself be using one of the charging units on an electric car?

Bloomberg said he would like to drive around the city in a nonpolluting car. But, he noted, “There is not a fast enough and big enough electric vehicle. I typically have a lot of people with me. But, I would do it if I could because I believe in leading by example.”