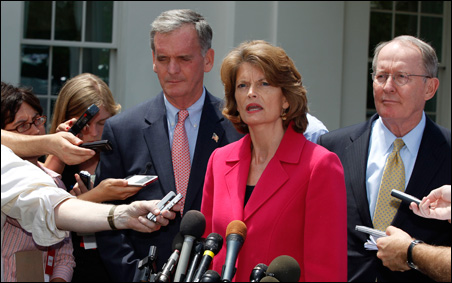 It may be days before state election officials decide the race. As of this morning, Mr. Miller – an attorney who matched his endorsement from Sarah Palin against Senator Murkowski’s name recognition and advantage in campaign cash – held a narrow 51 to 49 percent lead. But absentee ballots could close that gap, and those won’t be fully counted until early September.

Overall, insurgent candidates had an up-and-down day on Tuesday. In addition to the Alaska vote, Florida voters in their GOP gubernatorial primary picked a first-time candidate over the Republican establishment choice.

That neophyte, former health-care executive Rick Scott, had been dogged by questions about some of his business dealings. But he pumped more than $30 million of his own money into the race and prevailed over Florida Attorney General Bill McCollum, a veteran of state politics who may have seemed a bit worn around the edges to Florida voters.

An easy win for McCain
But the status quo ruled in Arizona, where Sen. John McCain won easily over his fellow GOP rival J.D. Hayworth. Early in the election cycle, Senator McCain appeared vulnerable to Mr. Hayworth’s primary challenge from the right. But McCain hasn’t survived in national politics so long by dithering. He brought in Ms. Palin to campaign for him, in essence saying, “Who’s the real maverick in this race, cowboy?” and in the end cruised to victory.

Of course, the $21 million McCain spent, largely on television ads, did not hurt.

The Meek victory sets up what promises to be a must-watch general election, as he will face off against the winner of the GOP primary, tea party-backed Marco Rubio, and Gov. Charlie Crist, who is running as an independent. Governor Crist bolted the Republican Party earlier this year after it became clear he could well lose the primary to Mr. Rubio.

If Murkowski ends up losing in Alaska, she would be the third incumbent senator to fall in this year’s primary season. The other two were Sen. Robert Bennett (R) of Utah and Sen. Arlen Specter (D) of Pennsylvania.