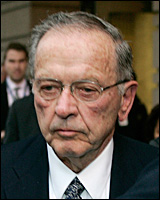 ANCHORAGE, ALASKA — In the gleaming international airport named for Ted Stevens, Alaska’s current senior US senator on Tuesday paid tribute to the man who was her father figure and mentor.

“Our hearts are broken, lives are shattered, and we have lost one of the greatest leaders our state will ever see,” Sen. Lisa Murkowski said at a subdued airport news conference. “There is nothing that has happened in my lifetime, there is nothing that has happened since statehood that Ted Stevens did not touch, that he did not build, did not create.”

Her assessment is not an overstatement. Stevens, who served Alaska as a US senator for 40 years until 2008, had a hand in all aspects of modern, oil-rich Alaska, starting with his early days as a federal attorney and his role in the campaign to win statehood. He was among five people who died when a small plane crashed Monday in the mountainous wilderness near Dillingham, in the state’s southwestern region.

From the Ted Stevens Anchorage International Airport in the state’s largest city to the sewage systems in the smallest Native villages, the former senator’s influence is evident. For his skills as a senator securing billions of federal dollars to build and support Alaska – funds dubbed “Stevens money” – he was revered in the state as “Uncle Ted.” Major accomplishments included the sweeping Alaska Native Claims Settlement Act of 1971, the authorization of the trans-Alaska oil pipeline, and the establishment of the modern federal fisheries management system. In 2000, the year his name was attached to the Anchorage airport, a local civic group and the state legislature also honored him as “Alaskan of the Century.”

Outside of Alaska, his penchant for “earmarking” was sometimes ridiculed. But the late senator was unapologetic about the money he wrested from the federal treasury for Alaska, a young and rough-hewn state that needed help to bring its infrastructure and services to par.

When he came to the Senate in 1968, starting what would become the longest tenure there for any Republican, Alaska was “more of an impoverished territory than a full-fledged state,” Stevens recalled in a farewell address delivered to his colleagues in November 2008.

“Where there was nothing but tundra and forest today there are now airports, roads, ports, water and sewer systems, hospitals, clinics, communications networks, research labs, and much, much more. Mr. President, Alaska was not Seward’s folly and is no longer an impoverished territory,” he said in the speech. “I am proud to have had a role in this transformation. My motto has been here: to hell with politics. Let’s do what’s right for Alaska. And I have tried every day to live up to those words.”

Stevens was also famous for his angry outbursts – displays that friends say were more calculated theatrics than expressions of heartfelt enmity – and for the “Incredible Hulk” tie he liked to wear when girding for an important legislative battle.

But those close to him say Stevens was an old-school statesman who, in contrast to today’s polarized style, had close professional and personal relations across party lines and who strove to achieve consensus on sweeping subjects like Native land claims and fisheries management.

When Democrat Max Gruenberg applied for a job on Stevens’ staff in the early 1970s, the senator assured him that party affiliation was a nonissue. “He said, `I hire Democrats,’ ” says Mr. Gruenberg, now a veteran state lawmaker who fondly remembers his days as Stevens’ legislative assistant. “He was just so good to me.”

That sentiment is reflected in the avalanche of accolades – from political adversaries as well as allies – that poured in after news spread Tuesday of Stevens’ death. “This is a great tragedy for the state and the nation,” Patti Higgins, chairwoman of the Alaska Democratic Party, said in a statement.

Stevens’ legacy was clouded at the end by his entanglement in political scandal. In 2000, the year Stevens was honored as “Alaskan of the Century,” a wealthy but ethically compromised businessman was directing a massive remodeling of the senator’s Alaska home. That house makeover, orchestrated by Bill Allen, former chief executive of the oil-field services company VECO Corp., became the focus of a criminal probe that resulted in conviction of Stevens on seven felony counts of failing to report valuable gifts.

Stevens steadfastly maintained his innocence. His conviction was overturned within six months at the request of Attorney General Eric Holder, who concluded that federal prosecutors had mishandled the case and deprived the defense team of access to evidence.

Although he was cleared, the criminal case took a toll on Stevens. Prominent Republicans had called on him to resign, including then-Gov. Sarah Palin (R), who was running for vice president of the United States at the time.

“I think he had lost faith in the judicial system for a period of time, and that was very hard for a man who helped shape the laws and build the law,” Senator Murkowski said at the news conference Tuesday.

Monday’s crash was the second major air disaster experienced by Stevens, who made it one of his missions to improve aviation safety in far-flung Alaska. In 1978, his first wife and four other people were killed when a small plane crashed in Anchorage. Stevens, badly injured, was one of two survivors.

Air crashes have marked Alaska history at other times. Alaska’s at-large House member, Nick Begich, and House majority leader Hale Boggs died when their small plane disappeared over a vast glacier in 1972. Begich’s son Mark went on to become mayor of Anchorage and, in 2008, defeated Stevens to become Alaska’s first Democrat to serve in federal office in 18 years.