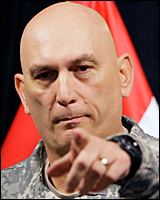 The United States is on track to meet a Sept. 1 deadline for withdrawing combat troops from Iraq, says Gen. Ray Odierno, the commander of U.S. forces there.

Speaking from Baghdad Sunday morning on ABC’s “This Week” television program, Odierno said Iraqi forces have been taking on more responsibility gradually over the past months, and will be ready to take the reins when the US draws down forces at the end of this month, from 80,000 to 50,000 troops.

“For the last 20 months, we’ve been slowly and deliberately turning over more and more responsibility to [Iraqi security forces], and they have stepped up,” Odierno told “This Week” anchor Christiane Amanpour. “They continue to do broad-scoped operations across all of Iraq. We continue to help them as they do these, and that will continue after 1 September.”

Violence has flared in the run-up to the deadline. July was Iraq’s deadliest month in two years, and that trend continued Saturday when a series of explosions rocked a crowded Basra market, killing 43, according to BBC News.

Odierno said attacks such as Saturday’s are attempts to “to stop the political process moving forward, to stop democracy moving forward, and to cause the government of Iraq not to continue its progress.” Despite such attacks, he said he sees “a broad change in the security environment here in Iraq” from where things were when he arrived four years ago.

Odierno told the Monitor in a July interview that Al Qaeda in Iraq had suffered significant setbacks over the past two years, and faced a financial crunch.

Asked Sunday about Iraq’s struggle to form a democratic government – trouble with March elections has left political parties squabbling over who should be prime minister – Odierno was optimistic, but said the troop drawdown was tied to the stability of Iraq’s security forces, not its government.

“All the sides are talking. They are working through the formation of the government. Do I think they will have made progress by the 1st of September? I think so,” he said. “But our numbers are not linked to that formation of the government. Our numbers are linked to the capacity of the Iraqi security forces being able to sustain stability, and I think they are moving towards that capacity.”

But the importance of forming of a stable government is not lost on Odierno. “We want to have the Iraqis form their own government. What we try to do here is facilitate that process,” he said. As the deadline approaches, Odierno said his primary concern is that groups will “try to take advantage and show weakness in the government of Iraq and try to create some sort of lack of confidence of the people in the process….”

Last month Odierno told reporters in Baghdad that Kataib Hezbollah, an Iraqi Shiite militant group with ties to Iran, has sought to take credit for the US’s departure from Iraq. He said that a large strike on US forces would pay dividends in propaganda for the group – and could be part of revised Iranian plans to destabilize Iraq.