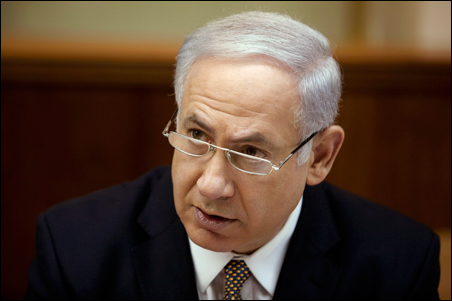 TEL AVIV — Savoring the diplomatic victory of renewed direct peace talks announced last week, Israeli Prime Minister Benjamin Netanyahu told his cabinet Sunday that a peace treaty with the Palestinians would be “a difficult thing, but it is possible.”

For more than a year, Mr. Netanyahu has insisted on face-to-face talks with the Palestinians without preconditions. By contrast, Palestinian Authority President Mahmoud Abbas had insisted that Israel first extend a building freeze in West Bank settlements. His acceptance of the US invitation to a Middle East peace summit to inaugurate direct talks marked a significant concession.

US Secretary of State Hillary Rodham Clinton announced Friday that Netanyahu, Mr. Abbas, Egyptian President Hosni Mubarak, and Jordan’s King Abdullah have been invited to a two-day peace summit in the United States starting Sept. 2 to kick off the talks, scheduled to last one year. The renewed peace talks after an 18 month hiatus will ease the diplomatic isolation suffered by Netanyahu since taking office in early 2009.

“It seems that Netanyahu has gotten the end result. … He is going into negotiations without paying a price on the [domestic policy] level,” says Chemi Shalev, the diplomatic commentator for the Israel Hayom newspaper. “But it’s also possible that he’s only postponed his problems. Even though he’s got a victory it’s a victory with a price.”

For one, there is a wide gap between Netanyahu and Abbas on the principles for an agreement. And if Netanyahu becomes more flexible, he’ll have to overhaul his coalition, which is sure to lose right-wing ideologues who oppose territorial compromise.

“It’s a good thing that they’re talking, but it is highly doubtful whether those talks are going to lead anywhere,” wrote Nahum Barnea in the daily Yediot Ahronot newspaper. “The two parties have exchanged a lot of words in the 17 years that have elapsed since [the Oslo Accords], and between those words there have been quite a lot of people killed and injured, but no peace agreement…. It is hard to believe that this time it is going to have a happy end.”

Cabinet Minister Binyamin Ben Eliezer, a member of the dovish Labor Party, told Israel Radio that Netanyahu currently has the best chance of any Israeli leader to strike a peace deal because he could convince Israeli security hawks to support it.

Netanyahu sounds an upbeat note
Acknowledging Israeli gloominess about the prospects for peace, Netanyahu said, “It is possible to understand why this doubtfulness exists. We are seeking to surprise the critics and the skeptics, but in order to do this we need a real partner on the Palestinian side. It is possible to succeed with a hand extended in peace, but only if someone on the other side likewise extends one.”

Even before Netanyahu begins discussing thorny issues like borders, the status of Jerusalem, and Palestinian refugees, he and the US must decide on a policy toward settlement expansion after the Sept. 26 expiration of an Israeli building moratorium in the West Bank. Israel has said it plans to continue building while the Palestinians are threatening to boycott the talks.

“He wants to unfreeze the freeze in September. If he does that in the middle of talks, he’s going to lose major points,” said Meir Javendanfar, a Tel Aviv-based Middle East analyst. “This is a liability that’s waiting to pounce on him.”