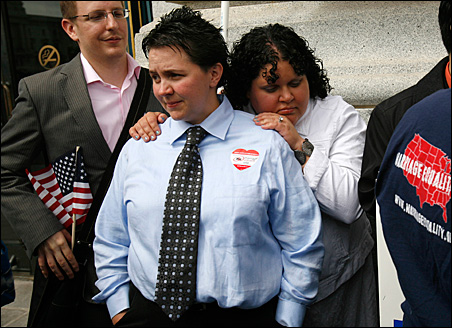 Lawyers for the proponents of California’s same-sex marriage ban vowed Thursday to appeal a federal judge’s ruling that gay marriages could resume in the state Aug. 18.

“This case has just begun,” said Jim Campbell, a lawyer with the Alliance Defense Fund. He said the legal team was “confident that the right of Americans to protect marriage in their state constitutions will ultimately be upheld.”

Gay rights advocates hailed the ruling and said they were hopeful the ban would be lifted within a week. “[This] ruling affirms that the purpose of our judicial system is to protect our constitutional rights, not to take away those rights,” said Rick Jacobs, chairman of the Courage Campaign.

US District Judge Vaughn Walker ruled Aug. 4 that the voter initiative, Proposition 8, violated the equal protection and due process rights of gay and lesbian couples who want to get married. He ordered state officials to stop complying with the ban on gay marriage.

What remained unclear was when his order would take effect. In his ruling Thursday, Judge Walker refused a request to delay his order indefinitely to allow an expected appeal by Proposition 8 proponents. Instead, the judge gave them a week to request a stay from the Ninth US Circuit Court of Appeals.

The judge didn’t stop there. He went on in his 11-page order to question whether Proposition 8 proponents still have legal standing to pursue the case.

California Gov. Arnold Schwarzenegger and Attorney General Jerry Brown have both announced that they will not seek an appeal in the case. They also declined to seek a stay of Walker’s ruling.

That leaves Proposition 8 proponents who are private citizens to pursue the case alone.

According to Walker, to establish legal standing to litigate the case, the Proposition 8 proponents must be able to show a “concrete and particularized injury.”

Since state officials regulate marriages, the governor and the attorney general have legal standing to defend Proposition 8, the judge said. But if the state chooses not to appeal, “proponents may have difficulty demonstrating [legal] standing.”

The Proposition 8 proponents might overcome this obstacle, the judges suggested, by demonstrating how they – the private citizens supporting the marriage ban – would be harmed by the resumption of same-sex marriage in California.

“The court provided proponents with an opportunity to identify a harm they would face if an injunction against Proposition 8 is issued,” Walker wrote. “Proponents replied that they have an interest in defending Proposition 8 but failed to articulate even one specific harm they may suffer.”

The judge said there is nothing in the record showing proponents face the kind of injury necessary to demonstrate legal standing. “As it appears at least doubtful that proponents will be able to proceed with their appeal without a state defendant, it remains unclear whether the court of appeals will be able to reach the merits of proponents’ appeal,” Walker said.

Who has been harmed?

It is clear from the judge’s order that he believes that Proposition 8 proponents face no harm from a lifting of the gay marriage ban. In contrast, he said, “the trial record left no doubt that Proposition 8 inflicts harm on plaintiffs and other gays and lesbians in California.”

He added, “Any stay [keeping the ban in place] would only delay plaintiffs’ access to the remedy to which they have shown they are entitled.”

Lawyers for the proponents had argued that a stay should be issued because any marriages performed while appeals are underway may be of questionable authenticity should a higher court overturn the judge’s decision.

In rejecting this argument, the judge said whether same-sex couples “choose to exercise their right to marry now is a matter that [those couples], and [those couples] alone, have the right to decide.”

It will now be up to the federal appeals court to decide whether the judge’s order should be enforced or put on hold. If the Ninth Circuit refuses to issue a stay, the proponents’ lawyers could seek a stay at the US Supreme Court.