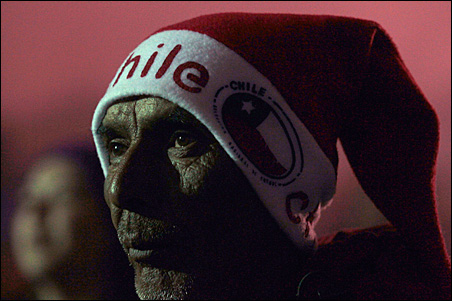 REUTERS/Ivan Alvarado
A relative of a trapped miner listens to the national anthem outside the mine.

From the president to the produce vendors, Chile is rallying as rescue workers embark on what could be a months-long attempt to save 33 miners already trapped for 17 days in a copper mine.

The discovery Sunday that the men were still alive elated Chileans. Up and down the capital of Santiago, drivers honked their horns as news emerged over car radios that the men have been huddled in a 500-sq.-ft. refuge some 2,300 feet underground since rock collapsed around them on Aug. 5.

“I cried with happiness. I had thought they were all dead,” says Jessica Marambio, who sells candy from a street kiosk in Santiago, adding that she will continue praying for their safety.

People from across the world’s No. 1 copper-producing nation have reached out to the anxious families. From the nearby coast, fishermen presented freshly caught fish to anxious family members outside the mine in Copiapo, 500 miles north of Santiago. Roman Catholic Church masses on Sunday reflected on the unfolding events, and on Saturday a Catholic youth progression began with a moment of silence for the men.

Rescue attempts have been stymied by the fragility of the collapsed mine. It has been impossible to reach the men through the main entry and ventilation duct, so relief workers drilled a nearby bore hole to the men. For more than two weeks, rescuers heard nothing from inside the mine.

But on Sunday morning, drillers reported hearing people banging on their drill shaft after they pierced a tunnel near the refuge. When they pulled the drill back out, it had a note attached: “We are fine in the refuge, the 33.” A video camera lowered through the bore hole showed the miners alive, their eyes flashing into the camera lens and later broadcast on television sets across the country.

The nation erupted into joy. “All of Chile is crying with happiness and emotion,” President Sebastian Piñera said. About 50 supporters gathered at Plaza Italia in the center of Santiago, waving flags.

But joy turned to concern as it became clear that it could take months, perhaps even until Christmas, to pull the men out. Rescue workers are sending supplies, including hydration gels and food, through the bore hole as they prepare for the rescue effort ahead.

“What we have to do is to secure this umbilical cord to stay connected with the miners, to keep them alive,” Andre Sougarret, manager of state copper giant Codelco’s El Teniente mine, told Reuters. They will dig two more shafts, one for ventilation and one to extract the men one by one. “Our initial estimate is that it will take three, four months [to drill],” Mr. Sougarret said.

The first tubes of sugar water have already been lowered to the workers, Minister of Mining Laurence Golborne told Radio Cooperativa. Crews will now drill another hole to provide a fixed telephone line to the refuge, Gov.r Ximena Matas said on CNN-Chile.

Paola Vinciguerra, president of the European Association of Disorders and Panic Attacks, says that maintaining contact with the group is fundamental to their survival. A team of psychiatric experts reportedly arrived Monday at the remote mine.

“It is important to maintain continuous contact, above all with their families,” she told the local La Tercera newspaper, “through visual and audio messages to alleviate the strong emotions caused by the grave effect in which they find themselves.”

Miners in Chile have country rallying around hope of rescue