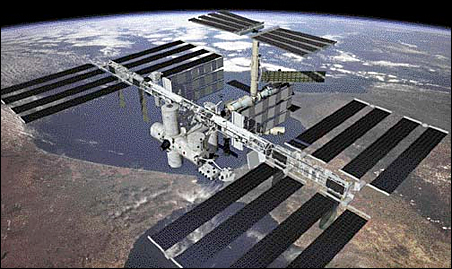 NASA
For now, the International Space Station is OK running on its remaining cooling pump.

When a cooling pump aboard the International Space Station broke Saturday, it set the scene for a space-station first.

When two of the ISS crew begin their spacewalk to replace the broken pump on Thursday, they will attempting the space station’s first so-called “Big 14” spacewalk – an excursion that involves replacing major station components with on-orbit spares, but without help from the space shuttle and its crew.

For now, the station is OK running on its remaining pump. Thursday’s planned spacewalk, however, represents what may be the first major test for a new breed of astronauts.

They are multitaskers – people with a broad set of general space skills rather than astronauts who train intensely for a specific task they must perform during a brief mission to orbit.

For Thursday’s spacewalk, for example, the current crew “has some familiarity with the task being asked of them,” said Michael Suffredini, the space station program manager, during a briefing Monday afternoon.

But the devil is in the details – from extracting mounting bolts in a particular order to the most effective way of moving from one location to another. The pending spacewalks must be carefully choreographed to make the most efficient use of limited life-support systems in the space suits and of the astronauts’ endurance. They also must coordinate activities between the space walkers and a crew member inside operating the station’s robotic arm.

Help from Houston
The only place to work these intricate movements out ahead of time is in the neutral buoyancy tank at the Johnson Space Center – a yawning pool with a full-scale mock-up of the space station lurking beneath the surface. Divers help space-suited astronauts work through the maintenance steps they must take movement by movement.

That information is then used to guide the space walkers as they perform their tasks while they hurtle some 200 miles above Earth at just over 17,000 miles an hour.

“For Big 14 failures in general, we typically allow about two weeks to prepare” for one of these spacewalks, says Courtenay McMillan, spacewalk flight director for the current ISS expedition

But a different spacewalk had already been scheduled for Thursday, and the space suits and air lock had been set up for it.

“We decided to take advantage of the fact that the crew … had the systems already to go. But this is a very aggressive time line for us,” she says. “Folks are working around the clock … so that we can be ready to go.”

Short circuit to blame?
The failed pump is one of two that circulate ammonia through radiator panels projecting from the station.

Inside the station, the cooling system uses water to draw excess heat from air warmed by electrical equipment, lab racks, and a half dozen floating humans. But water would instantly freeze outside the station, so another cooling loop using ammonia runs through heat exchangers, picks up the heat from the water loop, and transfers it to radiator panels extending from the station.

The crew is in no danger, NASA officials say. But the station has only one other functional cooling pump. If that pump failed as well, the dual outage “would be a relatively significant challenge for the program,” said Mr. Suffredini.

As it is, the crew has turned off some equipment to reduce the amount of heat the compromised cooling system must cope with.

The lead suspect behind Saturday’s failure is a short circuit in the failed pump, rather than something mechanical, Suffredini says. The station has four spare pumps bolted to its exterior.