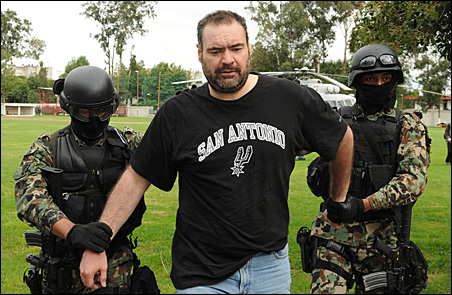 REUTERS/Office of the Marines
Mexican marines escort Sergio Villarreal after he was captured on the outskirts of Puebla on Sunday.

Sergio “El Grande” Villarreal Barragan, an alleged leader of the Beltran Leyva cartel, was captured in a raid Sunday led by 30 Mexican marines in the central state of Puebla.

His arrest follows that of Edgar “La Barbie” Valdez last month. The authorities say Mr. Valdez was trying to take over the leadership of the Beltran Leyva cartel, which allegedly splintered after the group’s leader was killed by Mexican forces in December.

This is the fourth high-level arrest in less than a year, and comes amid public fatigue over the strategy to root out drug trafficking. Since President Calderon sent thousands of troops and federal police in December 2006 across the country to fight organized crime, more than 28,000 have died in drug-related violence.

“This is a new and resounding blow by the federal government against crime, given the high rank and dangerousness of this person inside one of the country’s most extensive criminal organizations which has been deeply weakened,” national security spokesman Alejandro Poire said Sunday night.

The cartel and the fighting
Authorities blame the Beltran Leyva cartel for responsible for escalating violence in central Mexico, bringing to this once peaceful part of the country the mass graves and torture once largely limited to the US-Mexico border. The cartel has allegedly been weakened by infighting since the founder Arturo Beltran Leyva was killed on Dec. 16 during a military operation. Hector Beltran Leyva, still at large, and Sergio Villarreal Barragan were believed to be fighting a faction led by Edgar Valdez.

Analysts do not expect the cartel’s internecine feuds to wane, as territories remain in dispute.

“This is not the case of criminals ascending to be Roman emperors in which they only fight between the principal figures, but brutal gangsters that, with their paranoia, would execute even the pet if they believed it to be a potential internal enemy,” says Erubiel Tirado, a security expert at the Iberoamerican University in Mexico City. ”There is an undetermined number of potential bosses disputing the leadership of each group.”

Villarreal Barragan was one of Mexico´s most wanted criminals. And Mr. Poire said he now faces at least seven investigations involving drug trafficking and organized crime.

As was the capture of “La Barbie,” this latest is a victory for Calderon, whose administration seems to, almost daily, face a major setback in its war against organized crime.

Just last week, 85 prisoners escaped from a jail in Reynosa, in northern Mexico, and a mayor in the San Luis Potosi state was killed by hooded gunmen who stormed his office and opened fire. Over the weekend, Mexican authorities defused a car bomb in Ciudad Juarez, the country´s most violent city across from El Paso, Texas, and where in July four were killed by a similar car bomb.

US Secretary of State Hillary Clinton compared the violence to an “insurgency,” and said that Mexico was beginning to resemble the Colombia of 20 years ago.