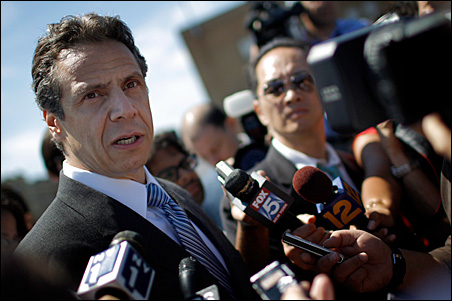 REUTERS/Mike Segar
“Attorney General Andrew Cuomo might be a victim of his own excess,” says Maurice Carroll, director of the Quinnipiac University Polling Institute.

The first angry candidate was Carl Paladino, the Buffalo businessman who won the Republican primary last week by vowing to shake up Albany with a baseball bat once he’s in the governor’s mansion.

Now, his democratic opponent, Attorney General Andrew Cuomo says he’s mad about the way things get done in the state capital as well. And, he was endorsed on Wednesday by another red-faced man – New York Mayor Michael Bloomberg, who observes that the public is frustrated about the partisanship that has taken over the country “from ocean to ocean, border to border.”

Indeed, political pollster John Zogby of Zogby International in Utica, N.Y., says the mood in the country is “down with whoever is up.”

He says the voters “are disillusioned, they want change and they want to know how they get it and who is there to help them.”

In the past, voters have often said they are unhappy as well. But, this time the job market has been soft for so long, the economy is playing a much greater role in the election than in a typical cycle, says Lee Miringoff, the director of the Marist Institute for Public Opinion at Marist College in Poughkeepsie, N.Y.

“It creates a lot of political disturbance,” says Mr. Miringoff.

How is that playing out in races around the country?

Zogby says he just finished a Florida poll in which an unusually high 26 percent of respondents said neither party is suited to govern.

But, Zogby says it’s hard to know where the voters’ anger will lead. For example, in California, where “a billionaire outsider,” Republican Meg Whitman, is running against Democrat Jerry Brown, the attorney general and former governor, recent polls show Mr. Brown ahead.

“We don’t know how the dust will settle on Nov. 2, and anyone making predictions about the elections is delusional,” he says.

That probably holds true in New York state as well. Mr. Paladino received a considerable bump in the polls after he won the Republican nomination over former Rep. Rick Lazio, who is also on the ballot on the Conservative party’s line.

On Wednesday, a Quinnipiac University poll on Wednesday, showed Paladino behind 49 to 43 percent among likely voters. Men now back Paladino 49 to 46 percent while women back Cuomo by 54 to 34 percent. Only 7 percent of the voters describe themselves as undecided although 21 percent of those who name a candidate say they might still change their minds.

What has caused Paladino to close so fast?

“Attorney General Andrew Cuomo might be a victim of his own excess,” says Maurice Carroll, director of the Quinnipiac University Polling Institute in a statement. “Politicians and polls have depicted him so relentlessly as a sure thing that he might be a victim of the ‘throw the bums out’ attitude that his incumbents in this angry year.”

The Quinnipiac poll found 41 percent of the voters want a candidate who “can bring needed change to Albany.”

More poll numbers are expected in the days ahead, including a Marist poll on Friday which Miringoff says may show the race is not so close.

No matter – Cuomo says he has already gotten the message.