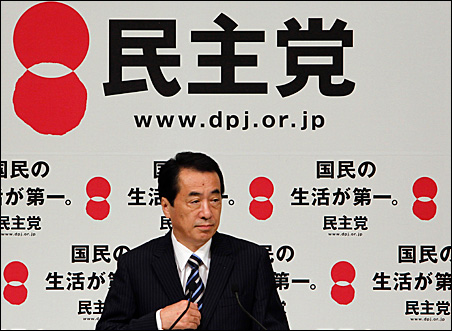 REUTERS/Kim Kyung-Hoon
Prime Minister Naoto Kan speaks to the media after winning the Democratic Party of Japan party leadership vote at a news conference in Tokyo on Tuesday.

TOKYO — After months of riding a political merry-go-round, Japan’s governing party opted for a modicum of stability today when it gave its overwhelming backing to Prime Minister Naoto Kan, and avoided changing prime ministers for the third time in a year.

The former political activist became prime minister just three months ago and today easily defeated his only rival, the scandal-tainted Ichiro Ozawa, in a race for the leadership of the Democratic Party of Japan (DPJ) and by extension the spot of prime minister.

The election campaign exposed deep divisions inside the party over economic policy. Kan wants to rein in debt to avoid a Greek-style crisis and has so far showed little inclination to intervene in the foreign exchange market, while Mr. Ozawa favors fiscal stimulus and bold currency intervention.

After appearing to dally with the idea of an Ozawa-led party, the DPJ is at least in synch with voters, who in opinion polls leading up to the leadership election prefered Kan to his challenger by a margin of 4 to 1.

Still, Kan’s margin of victory was wider than many pundits had expected: He won by 721 points to Ozawa’s 491 in a weighted voting system involving members of Parliament (MPs) and rank-and-file DPJ members.

Power of public opinion
MPs who might once have been expected to support Ozawa had abandoned him out of self-interest, according to Jeff Kingston, director of Asian studies at Temple University in Tokyo.

“The prediction was that many MPs owed him for the party’s election victory last year, but they were also worried about defying public opinion,” he told the Monitor. “They realized that Ozawa as leader would be a disaster for them and for the party.”

As it was, Ozawa, who has earned a reputation as a fearless backroom dealmaker in his 40-year-career, could only smile and offer a handshake after being trounced by his rival.

Kan reminded DPJ members of the scale of the challenges facing the Japanese economy, on a day when the dollar dipped to a 15-year low against the yen, adding to fears that the currency’s rise is dampening demand in key markets such as the United States and China.

“Japan is currently in serious difficulty,” he said. “We must rebuild Japan to make it a healthy country to hand on to the next generation. I will stake my life on doing that job and on gaining the support of the people.

“Now the election is over, I seek the full participation and support from all lawmakers and members of the Democratic Party.”

Ozawa credited with change of party power
Ozawa, a seasoned tactician, is widely credited with masterminding the DPJ’s general election victory, ending more than half a century of almost unbroken rule by the Liberal Democratic party.

“Ozawa doesn’t have much of a future in his own party, and if he leaves you have to wonder how many other people would be willing to follow him,” he says. “He’s toxic – a powerbroker without power.”

Ozawa is expected to take a back seat while he faces possible legal action over a political funding scandal. Though he could be indicted within weeks, Ozawa has vowed to clear his name.

But even with his opposition banished, for now, to the political hinterland, Kan cannot afford a moment’s complacency. The DPJ suffered a serious setback in July’s upper house elections and must now look to other parties to support fiscal reforms and other key legislation.

“This leadership election was just a sideshow,” says Kingston. “Kan needs to work with other parties in the Diet, and the prospects for that don’t look good at the moment. There could be more policy gridlock, for which he may pay a hefty price. He’s not out of the woods yet.”