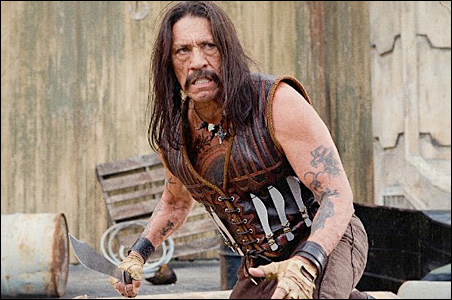 Overnight Films
Danny Trejo stars as Machete, an ex-Federale who launches a brutal rampage of revenge against his former boss.

LOS ANGELES — “Machete,” which opened in movie theaters Friday, has garnered plenty of attention for its racy scenes and over-the-top gore. But this spoof of a film also has a subtheme — immigration.

“Machete” follows the misadventures of a xenophobic US senator (played by Robert De Niro), a gun-toting priest (Cheech Marin), and a campy nun (Lindsay Lohan) caught in a failed murder plot to stir up anti-Mexican sentiment. Machete refers not only to formidable knives but also to the main character, played by Danny Trejo.

The promoters of the movie capitalized on its immigration undertones in a trailer for the film, released around the time that Arizona’s controversial immigration law was making headlines. In the trailer, Mr. Trejo growls to the camera, “This is Machete with a special Cinco de Mayo message … to Arizona.” Insinuations of violence and murder follow.

Well before the opening of “Machete,” this year has been a red-hot one for immigration issues. Besides Arizona’s immigration law, some Republicans have asked whether the United States should rethink “birthright citizenship” (the automatic granting of citizenship to anyone born in the county).

Now, some are wondering whether “Machete” will only add flames to the fire. As the Los Angeles Daily News put it in a headline: “ ‘Machete’ – sharp social satire or reverse racism?”

Answers vary, but most seem to agree: It’s fine – as long as viewers know what they are getting into.

“Is this movie going to change people’s minds? No. Is it going to advance the public dialogue? No,” says Daniel Stein, president of the Federation for American Immigration Reform. “Is it going to improve the mutuality of respect and a greater sense of ethical balance of right and wrong? No.”

But Bob Strauss, a Daily News reviewer who has seen the film, says it’s simply a “trashy action movie, an exploitation film mainly interested in ultraviolence and getting women out of their clothes.” He reflects back to D.W. Griffith’s “Birth of a Nation,” which sparked race riots for promoting white supremacy and depicting Ku Klux Klan members as heroes. But he says, “I don’t think “Machete’ is important.” He adds, “It’s not going to cause any riots. It can certainly make you think if you want to.”

That is exactly what Hezekiah Lewis, Villanova University assistant professor of film studies, hopes will happen. He has lots of advice for those who want to see the film.

“We all need to be better at educating our kids on what we’re doing – what exactly satire is and how does it really relate to what’s happening in the real world,” he says. Spike Lee’s “Bamboozled” – about a modern televised minstrel show featuring black actors donning blackface makeup – did this well, he says. It helped that a teaser by Mr. Lee himself at the opening asked viewers to “suspend their disbelief.”

But Barbara O’Connor, director of the Institute for the Study of Politics and Media at California State University, Sacramento, expresses concern for younger people going to the R-rated film. Those so close to the immigration issue that they have lost their sense of humor about it or are too caught in the emotion could also have negative reactions.

“Yes, this movie is goofily violent, but it’s also dealing with issues that are largely visceral,” she says. “I don’t know that people in the middle of the debate will view it as satire.”