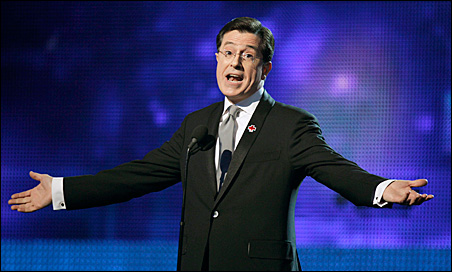 REUTERS/Mike Blake
Stephen Colbert: “Now is the time for all good men to freak out for freedom!”

BOSTON — Mark your calendars. The Rally to Restore Sanity and the March to Keep Fear Alive will be held on Oct. 30 on the National Mall in Washington.

And we’re pretty sure Glenn Beck has not been invited.

First up to the plate was Jon Stewart.

In response to “the loud folks,” such as the Hitler-sign making folks, Stewart asks, “Why don’t we hear from the 70-80 percenters?” – the majority of Americans who don’t have extreme political views.

Enter the Rally to Restore Sanity.

With the motto of “Take it down a notch for America,” Stewart is offering to provide signs with the “appropriate” level of political emotion, such as “I disagree with you, but I’m pretty sure you’re not Hitler.”

You could also go with “I am not afraid of Muslims/Tea Partiers/Socialists/Immigrants/Gun Owners/Gay…but I am scared of Spiders.”

To counter Stewart’s Rally to Restore Sanity and to restore “truthiness,” Stephen Colbert announced his own rally: The March to Keep Fear Alive.

Calling Stewart’s announcement “disturbing,” Colbert says he will “not take it down a notch,” saying that “Now is the time for all good men to freak out for freedom!”

And, “Need I point out that ‘reason’ is one letter away from ‘treason?'” Colbert asks.

Rumors about a march to counter Glenn Beck’s Restoring Honor rally on the anniversary of Martin Luther King’s “I Have a Dream” speech have been building. Monitor Staff Writer Gloria Goodale writes:

The call for Colbert to decamp to the nation’s capital began last week as a midnight rambling posted by user mrsammercer on Reddit.com, which was then picked up by the Huffington Post and turned into a genuine Internet movement, complete with a Facebook page, a website, and ardent viral fans.

Apparently, as Time magazine stated in one of their headlines about the comedians’ rallies, “The Internet Wins.”

The internet campaign started by Reddit has raised over $200,000 for charity so far and Stewart and Colbert have hopped on board.

Is this an insightful mockery of media and politics, or another way to spoil a National Mall picnic on a Saturday afternoon?