How do you say “And the winner is …” in Norwegian?

A year after the Norwegian Nobel Committee surprised the world by awarding Barack Obama its prestigious peace prize, speculation is heating up over who will follow in the American president’s footsteps when the 2010 prize is announced Friday.

Chinese dissidents, an Afghan human rights advocate (who happens to be a woman), Russian rights activists, a Burmese pro-democracy media organization, and Sierra Leone’s truth and reconciliation commission are thought to be among the top candidates this year.

In other words, if a name like Liu Xiabao, Sima Samar, Svetlana Gannusjkina, or an organization like Democratic Voice of Burma is not yet a household name to you, any one of them may be by Friday afternoon.

Keen Nobel Peace Prize handicappers may differ over who is likely to win the prize, but all agree that after the “aspirational” nature of Mr. Obama’s win, this year’s prize is almost certain to be awarded based on accomplishments.

“I would speculate that the wording ‘in the preceding year’ [in Alfred Nobel’s 1895 will establishing the famed prizes] will be emphasized by the committee this year,” says Kristian Berg Harpviken, director of the Peace Research Institute Oslo (PRIO).

Accomplishments vs. aspirations
A number of the earliest Nobel Peace Prizes were awarded based on “aspirations,” Mr. Harpviken says, but he adds that the committee that decides the award has over the decades balanced the accomplished and the hoped-for, and he expects a move back to the former this year.

Other peace prize watchers have put jailed Chinese dissident Lui Xiabao at the top of their list. But Harpviken, who spoke Wednesday at the US Institute of Peace in Washington, says he believes Mr. Xiabao’s time may have passed.

“The right moment for awarding a Chinese dissident probably would have been 2008, the year of the [Beijing] Olympics,” he says.

Time ripe for an Afghan?
Harpviken cites several reasons for putting Afghanistan’s Ms. Samar at the top of his list, including that she is a woman, and no woman has won the prize since the Iranian Shirin Ebadi in 2003. 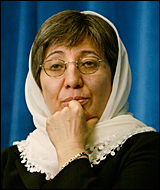 Beyond that, awarding her would fit with a transition in Afghanistan that the committee may want to support, he adds. “This is a year when we are moving from sharp weapons in the Afghanistan conflict to increasingly talking about the need for negotiations,” he says.

Finally, the committee might find it attractive to boost the profile of an advocate for Afghan women’s rights a time when those rights are thought to be threatened by an eventual accommodation of the Taliban.

“A prize to Sima Samar … would make it considerably harder to leave human-rights issues by the roadside,” Harpviken says, something that would be “very attractive to the committee.”

Another point on which just about everybody agrees: Don’t expect a Western male to take this year’s prize. Tony Blair is a perennial favorite on some lists, but his role in – and recent justification of – the Iraq war has probably done him in. Bill Clinton’s name also surfaces, but a past US president following the sitting US president seems out of the question.

Of course the possibility remains that the prize will go to an individual or a group that no one is talking about. After all, the Norwegian Nobel Committee received 237 peace prize nominations by the submission deadline of Feb 1.