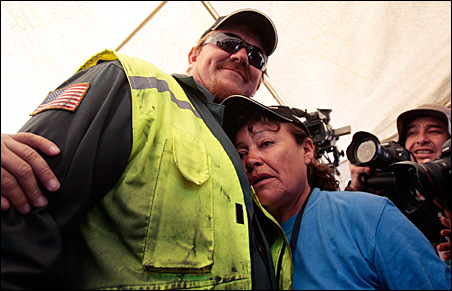 REUTERS/Luis Hidalgo
Elizabeth Segovia, sister of one of the 33 trapped miners, is comforted by drilling machine operator Jeff Heart after the completion of the escape hole.

CALDERA, CHILE — Bernarda Lorca would usually be sitting in her wheelchair, selling cosmetics and handmade crepe-paper flowers on the street in Santiago. Instead, she spent last night at the dusty San Jose mine site here, making flowers for the dozens of women who have waited at the mine gate for 68 days since a cave-in trapped their husbands, brothers, and sons.

With the world’s biggest copper producing country in a frenzy over the possible imminent rescue of 33 trapped miners, Ms. Lorca is part of a caravan offering both financial and moral support.

The collapse of the mine has helped pull together a geographically disparate, class-conscious, and often individualistic country.

“The people are more united,” Lorca said the dining hall at Camp Hope, where the families have been joined by more than 1,000 journalists awaiting the mine rescue. “Chile is very divided. The rich are rich and the poor are poor. Here, people who might be a bit snobbier have to walk in the same mud as everyone else. You can’t walk around here in polished shoes.”

Rescue begins at midnight
The Chile mine rescue is scheduled to begin tonight at midnight, Mining Minister Laurence Golborne said yesterday. Preparations have taken almost two months since the miners were found alive by drillers Aug. 22. Since then, the rescue team drilled a 622-meter chute to the miners’ living space. The tube is big enough to hold a metal cage that that will protect the workers as they are hauled up by winches and pulleys on an inch-thick steel cable.

The workers’ family members, who built a makeshift town outside the mine gates and lived there since the accident, will have the opportunity to greet the men as they emerge and recuperate in private rooms and then in the hospital.

Home cooking and letters of support
A group of a dozen women in matching blue windbreakers spent last night giving out carrot cake and freshly fried cheese empanadas to families, supporters, and reporters. They come every week.

Days earlier, Rubén Figueroa arrived with a card for the miners from his daughter’s third-grade class. He had bicycled 120 miles from Santiago before a trucker gave him a ride the rest of the way to the mine. “You just have to support them,” Mr. Figueroa said.

Families have received cards and messages of support from around the world. And Eduardo Farkas, a Chilean mine owner, started a bank account for each of the miners and donated $10,000 per person to get the donations started.

Work crews have raised the flags of Canada, the US, and Argentina, among others. Palestinian ambassador Mai Al Kaila visited the site, adding her flag to the collection.

The cooperation may not last. There is already debate over how to prevent future problems, with some people calling for state takeovers of smaller miners, others pushing for increased private investment, and others demanding that small mines be shut down, potentially putting people out of work.

There have also been grumbles from people in southern Chile, which was hit by the fifth-biggest earthquake in recorded history Feb. 27, that the government has been focused entirely on the miners and that earthquake reconstruction has fallen off the agenda.