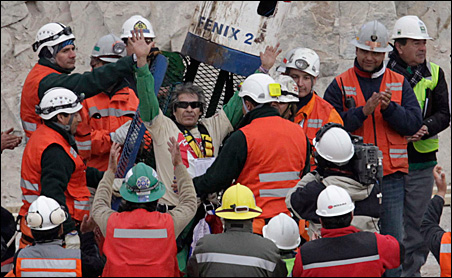 REUTERS/David Mercado
Mario Gomez, 63, the oldest of the 33 trapped miners, celebrates as he arrives on the surface as the ninth to be rescued on Wednesday.

SAN JOSE MINE, CHILE — Capsule down, capsule in the tunnel, capsule up. Cheers and chants of “The miners of Chile!” exploded each time another one of the 33 miners trapped for more than two months was pulled to safety.

The crowds of supporters barely thinned the day the miners began to emerge from the mine after 69 days below the surface – even deep into the wee hours of the morning.

Families huddled for warmth around campfires, but few were staring at the glowing charcoal. All eyes were on big-screen televisions with live broadcasts of the conclusion of the deepest, most time-consuming mine rescue ever.

In Camp Hope, the makeshift village started by family members of 33 miners trapped in this copper and gold mine, 10 weeks of anguish, excitement, boredom, and anticipation culminated in tears of joy just after midnight as first one, then a second, and eventually many miners were hauled out of their steamy dungeon in a tiny cage.

The miners were greeted by President Sebastian Piñera, with the arrival shown live on the government television network.

Two or three family members awaited each miner and were allowed to accompany them to private rooms in a field hospital built here in recent weeks. Some miners led energetic cheers and gave high fives to the waiting crowd before going off to rest.

Outside the mine gates, dozens of national police officers used barricades to keep a vehicle path clear through the throng of more than 1,000 journalists from 40 countries. Cameramen fought for views of the joyous families, knocking down shelters that had stood throughout the months-long vigil.

“It’s hard to be here now,” said Camila Gomez, 20, as she waited for her father, Mario Gomez, the oldest miner trapped below. “It’s a mixture of feelings – nervousness, anxiousness, happiness, but mostly just very calm. The moment’s here to see my father. I’m going to tell him I love him very much.”

Authorities have turned the Atacama desert into a vast rescue facility, with traffic halted for miles around and restrictions on outdoor lighting so helicopter pilots shuttling the miners to the hospital wouldn’t be blinded by headlights.

IN PICTURES: Chile mine rescue