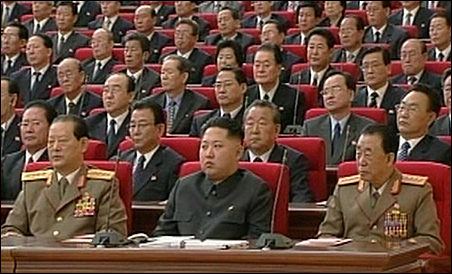 In the space of a few hours, North Korea opened an entirely new chapter in the turbulent history of the Korean Peninsula.

It wasn’t that the regime had changed, or that policy had changed. Rather, it was that change was inevitable, eventually, and a new leader was on the tortuous journey to the top.

The new leader was a young man named Kim Jong-un, the choice of his father, ‘Dear Leader’ Kim Jong-il, who has survived longer than most people thought likely after a serious illness.

It was those intimations of mortality that added urgency to selecting an heir and to seeing that he gets the proper training to take over the government and country in a time of severe food shortages, seasonal flooding, and nonstop confrontation with North Korea’s historic foes, South Korea and the United States.

The easy part was the anointment of Kim Jong-un – Swiss-educated, reportedly a fan of US pro basketball, the youngest of Kim Jong-il’s three sons – first as a general and then as vice chairman of the military commission of the Workers’ Party at its annual conference on Sept. 28. Now he’s got to learn the job – and chart his course.

Which way will the regime go once Kim Jong-il dies and Kim Jong-un takes charge as the third-generation leader of a dynasty established by his grandfather, the long-ruling Kim Il-sung, who died in 1994? Will the son, no longer a kid after his debut at the party conference, swing toward reconciliation and rapprochement with the North’s enemies – or will he want to flex his muscles, to show the generals how tough he is?

Jack Pritchard, for several years the US negotiator trying to persuade North Korea to jettison its nuclear power in favor of several billion dollars in aid, says he believes the time is ripe. Or, as he says, “There are opportunities for a reduction of tension.” He goes on: “The transition of power in North Korea to a relatively weaker one” presents “an opportunity.”

The danger, says Mr. Pritchard, now president of the Korea Economic Institute in Washington, is that “we’re moving toward business as usual” despite the repercussions of South Korea’s claim that a Navy corvette, the Cheonan, was sunk in March by a North Korean torpedo, a claim North Korea denies. Pritchard does not advocate a war of vengeance. Rather, with Kim Jong-un now firmly placed as heir, he wants more talking in the quest to get the North to give up its nuclear weapons and reconcile with its enemies.

The ‘nuclear card’
But don’t count on such a happy scenario – not after North Korea’s Pak Kil-yon, the country’s ambassador to the United Nations for nearly a decade, followed Kim Jung-un’s emergence with the kind of tough talk for which North Korea is known. Far from calling for diplomatic solutions, Mr. Pak said the North’s “nuclear deterrent should be strengthened” against the US.

Lee Sang-hyun of the Sejong Institute, an influential South Korean think tank, explains why North Korea is going to persist in holding the nuclear card in an era of transition and uncertainty in Pyongyang.

“For succession to proceed in North Korea,” he says, “the only inheritance that Kim Jong-il can pass on is its nuclear program.”

Indeed, the country is a classic economic basket case, bereft of industry and with a high percentage of its 24 million people always hungry, many starving and diseased. If it has nothing else, at least it has enough nuclear materiel for a dozen warheads, according to intelligence estimates.

Or, as Bruce Klinger of the conservative Heritage Foundation puts it, “Kim Jong-il believes the nuclear bomb is the one and only means to preserve his system.”

Most observers say this is not likely as long as Kim Jong-il is alive. The first North Korean video footage of him, shot at the Workers’ Party conference at which he got a seat on the central committee as well as vice chairmanship of the military commission, shows him in the front row of an auditorium packed with more than 1,200 delegates. Distinctive in his dark blue Mao suit, he applauds dutifully, unsmiling, along with everyone else, as his father waves from center stage.

As of now, there’s no way for Kim Jong-un to change policy even if he wanted to. He’s constantly guarded by a core group handpicked by his father. The generals and Politburo members around him are not going to let him get out of line, any more than they would let anyone get close enough to threaten his life.

North Korea’s propaganda machine is also building him up as a tough guy, hence the persistent rumors that he ordered the attack on the Cheonan. “The purpose of this association is to create an instant legend around Kim Jong-un’s military prowess,” says Pritchard. Not that he was “involved,” he adds. Rather, “once the military action was successful, credit can be appropriately bestowed on the younger Kim.”

Much will depend on how Kim Jong-un responds to the “protection” afforded by Kim Jong-il’s right-hand man, brother-in-law Jang Song-thaek, and Mr. Jang’s wife, Kim’s younger sister, Kim Kyong-hui. The aunt, a diminutive, stern-looking woman, is there in the picture, in uniform. She is also a newly minted general.

It’s hard to believe Kim Jong-un will want to stay forever under the thumb of this aging couple. It’s possible, eventually, he will find soul mates among the generals, who may turn him against the excessive influence of his aunt and her husband.

Not that an internal power struggle would change basic policy much.

“North Korea’s goal is to survive,” says Kim Jin-moo of the Korea Institute for Defense Analyses. “The survival strategy is to become a nuclear state, to expand, to heighten the military standoff between the two Koreas.”

In the much studied picture of the North’s heir apparent, Kim Jong-un looks poker-faced as the crowd around him roars its endorsement for his father. He doesn’t seem the type to reverse course. But after the death of his father? Only then, it’s said, will we come to know if the son has a mind of his own.