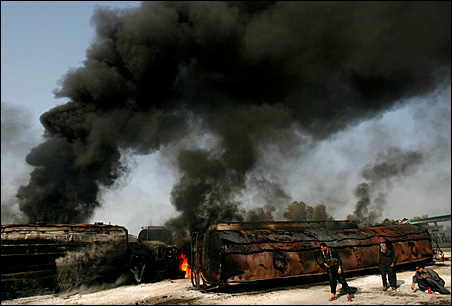 WASHINGTON — The Pentagon Thursday defended US troops accused of accidentally killing Pakistani paramilitary forces in a raid along the border earlier in the day.

Pakistani border troops fired their rifles at US helicopters taking part in the raid “as a warning,” according to Pentagon spokesman Col. Dave Lapan, who said he had obtained this information through a statement released by the Pakistani government.

“You fire at a helicopter in a combat zone, they usually take that as hostile and return fire,” he said.

The US military is now investigating whether the raid that has reportedly left three Pakistani border troops dead was the result of a breakdown in communication between the two countries, whose relationship has been strained by a spate of US cross-border attacks on militants in Pakistan’s northwestern tribal areas.

“That will be part of this process,” Lapan said. “To determine how this happened, why it happened, were protocols followed, were they not followed – those types of things.”

In the meantime, Pentagon officials says that Pakistan’s move to block a key supply line for US troops through the Khyber Pass in the wake of the deaths of its troops will have little impact on US military operations in Afghanistan.

While the busy border crossing known as Torkham Gate is now closed, other key transit points remain open “at last report,” according to Lapan, who stressed that the US military has alternate means of bringing in fuel, ammunition, and food for US soldiers.

But long-term impact of the closure on US supply lines – and whether it is temporary – is unclear, he added. “That remains to be seen.”