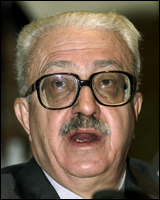 BAGHDAD — Tariq Aziz, Saddam Hussein’s deputy who was the international face of the regime, was sentenced to death Monday by an Iraqi court.

Iraq’s high tribunal, set up to try officials from the former regime, sentenced the former deputy prime minister to hang for what it termed crimes against humanity.

The charges related to murder and torture of members of Islamic parties opposed to Hussein’s leadership. The sentence carries an automatic appeal.

Mr. Aziz, the only Christian at senior levels of the regime – where he also served as foreign minister – has been in prison since he gave himself up in 2003. He was sentenced last year to 15 years in prison for involvement in sentencing to death merchants convicted of black-market currency trading in 1992. He was also sentenced to another seven years for a campaign against Iraqi Kurds.

The current trial has been going on since December 2009. Four other defendants were also sentenced to death by the presiding judge, Mahmoud Saleh al-Hassan, who ran unsuccessfully for parliament as part of the State of Law coalition of Prime Minister Nouri al-Maliki. One of the main targets of Saddam Hussein’s campaign against Islamic parties was the Dawa Party of Mr. Maliki.

International experts have criticized the proceedings, saying former regime officials should be tried in an international court, free of potential political influence.

Aziz is elderly and in ill health. His family and lawyer have argued that he should be released for humanitarian reasons.