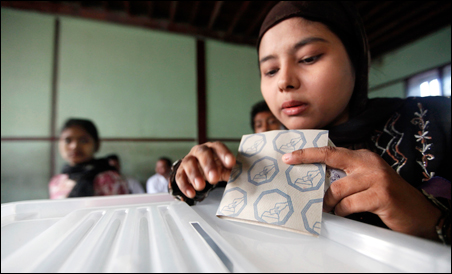 REUTERS/Soe Zeya Tun
A woman casts her ballot at the polling station in Sittwe, Rakhine state, on Sunday.

MYITSONE, BURMA — A pro-junta party appears set to win Sunday’s multiparty election in Burma (Myanmar) which was fraught with irregularities and omissions.

For the country’s ethnic minorities, the stakes are high. As well as seeking greater freedoms under a new Constitution, many are also grappling with a rush by outsiders to exploit their natural resources, a move which is stirring tensions.

In this riverside community of ethnic Kachins, April began with a bang: a string of mysterious predawn explosions near the site of a giant Chinese-financed dam that is under construction. Authorities rolled up the usual suspects – disgruntled locals, rebel sympathizers – but later released them without charges. Security was tightened on access roads to the dam.

Then came the gold miners. Equipped with pumps and drills, and armed with permits from the military and a local militia group, they began digging up riverbanks and rice fields, and dumping cyanide-laced rock into the river. The aim is to drive locals out, so that the dam builders can proceed unhindered, say villagers. On a wooden house opposite a redbrick Catholic church, a handwritten sign reads, “Protect Us, Mary.”

The Myitsone dam is one of seven planned on tributaries of the mighty Irrawaddy River as it winds through the homeland of Burma’s Kachin minority. It highlights the accelerating grab for natural resources by Burma’s neighbors, defying the wishes of local populations who rarely see the benefits of such projects. Many are ethnic minorities whose rights have been trampled by the ruling junta, which held a rare election on Nov. 7.

The project is due for completion by 2017 and would eventually displace about 10,000 people and flood an area the size of New York City. Most of the power will be exported to energy-hungry China, which is also building an ambitious pipeline to transport crude oil and offshore gas from southwest Burma.

Eyeing Burma’s resources
Other keen buyers of Burma’s resources include India, Thailand, and South Korea. Approved foreign investment in the first seven months of the year rose to $16 billion, according to official data, up from less than $1 billion in 2007. Western companies generally steer clear of Burma, which is subject to United States, Canadian, and European sanctions.

Kachin groups have unsuccessfully petitioned both the Chinese government and Burma’s military rulers to halt the dam. It poses a safety risk, some argue, because of its location near a major earthquake fault line. Any collapse in the dam’s basin would threaten the Kachin capital, Myitkyina, which lies down river, and those living in its hinterland.

“If the project is really for the people, we will be happy. But I don’t think it will be for the betterment of our community,” says an academic in Myitkyina, who requested anonymity out of fear of the government.

The bombings in April, which reportedly killed four workers, were not the first security alert here. In 2008, armed troops from the Kachin Independence Organization (KIO), a rebel group, reportedly extorted taxes from Chinese workers at the site. Tensions between the KIO and Burma’s military rulers have risen sharply in the run-up to the election after the KIO refused to turn its troops over to the military’s control.

Environmental and spiritual significance
Environmental groups have highlighted the threat posed by the dams to pristine rainforest and fragile river systems. Researchers recently announced the discovery of a new type of snub-nosed monkey in the jungles around here, which have already been exploited by logging companies. Scientists have warned that dam construction and more logging roads would invade the monkey’s habitat.

For Kachin, who are mostly Chrisitans, the dam is also a spiritual affront: The confluence of two rivers that form the Irrawaddy is a pilgrim site for Catholics, in contrast to the Buddhist beliefs of Burma’s majority ethnicity.

One village at the confluence of the three rivers has already been relocated to new houses built on the road to Myitkyina. Residents in Tang Hpre, the gold-boom village, say that they will probably be next. “We all want to resist the move, but what choice do we have?” asks one.

Gold diggers push out locals
Panning for gold along the river valleys of northern Burma isn’t new. But the influx of miners since April has swamped Tang Hpre, which has about 600 residents and used to be a quiet spot to admire the tranquil river setting. A church leader estimates that more than 2,000 migrants had come to dig for gold, encouraged by the military, which wants to exploit the resources before the area is inundated.

At the river’s edge, a middle-aged woman sifts for gold using a wooden pan. She says she paid $15 for a monthly permit to remove used ground rock from mine sites, then search for whatever she could sell. She reckons she could make $3 to $4 a day, as she carefully tips a handful of black silt containing tiny sprinkles of yellow into a metal dish.

Residents say authorities set a new deadline of March 2011, when the current school term ends, for the village to be relocated. The church leader says he is skeptical of claims that those who move will be paid compensation for their land. “They promise us so much, but we never see it,” he says, adding he would stay put “until the river is up to my nose.”