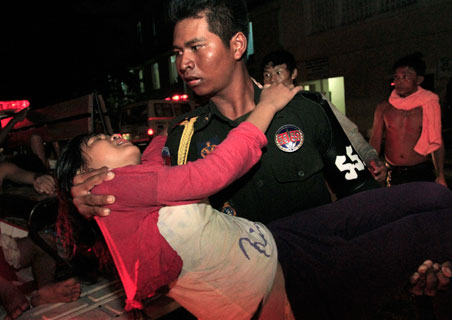 REUTERS/Chor Sokunthea
A stampede victim is carried to safety in Phnom Penh on Tuesday.

PHNOM PENH, CAMBODIA — A stampede in Cambodia late Monday night killed at least 339 people and injured as many more, with hospital officials projecting the death toll would continue to rise.

The stampede happened during Cambodia’s annual Water Festival, which drew a record 4 million people from around the country and region to watch three days of traditional boat races on the Bassac River in the capital.

Prime Minister Hun Sen called it the “biggest tragedy since the Pol Pot regime.” While the comparison is extreme – the Khmer Rouge caused the deaths up to 2 million people in the late 1970s – this is the most deadly incident at a festival plagued by repeated problems.

A Singaporean boat capsized in 2008 and killed five rowers, and one Cambodian rower drowned in 2009. The latest incident raises questions whether the government has the capabilities to handle the ever larger festival crowds, which have increased by several million people in recent years and overwhelmed Phnom Penh’s facilities.

The stampede broke out on a recently built bridge that crosses from the mainland over the Bassac River to Diamond Island, where a concert was held Monday night to conclude the Water Festival.

Yan San, who was visiting from outside the city, says the bridge became clogged at 9 p.m., a stampede began at 11 p.m., and he himself was stuck on the bridge until 1 a.m. with his legs injured.

Prime Minister Hun Sen addressed the nation at 2:30 a.m. local time and updated the toll to 339 people dead and 329 injured, according to the Phnom Penh Post. “With this miserable event, I would like to share my condolences with my compatriots and the family members of the victims,” he said.

As the night wore on at Calmette, more than 50 bodies were laid in the hospital’s courtyard for family members to identify. Ambulances continued to arrive early into this morning. The hospital was inundated with patients sitting in hallways and lying on floors awaiting treatment.

The exact cause of the stampede was unclear. Reuters reported that a scare was set off when several people were electrocuted from an unknown source. CNN reported that Cambodian police sparked the stampede by firing a water canon at pedestrians to get them to move off the bridge.

“A lot of people jumped into the water because they knew how to swim and they were scared they would die otherwise,” says Kim Houng, who was being treated at Calmette early this morning after passing out on the bridge.

“If I was on the side of the bridge, I would have jumped in the water, too.”