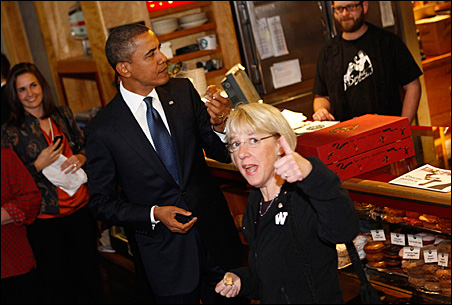 REUTERS/Kevin Lamarque
Sen. Patty Murray gives a thumbs-up as she and President Barack Obama eat donuts at a shop in Seattle, Washington, on October 21.

In the next-to-last US Senate race to be determined, Sen. Patty Murray (D) of Washington State has won reelection. That leaves just Alaska, where incumbent Lisa Murkowski – a write-in candidate in a three-way race – appears to be leading.

It was a bit of bright news in an otherwise grim Election Day outcome for Democrats – especially for President Obama, who had campaigned hard for Senator Murray.

Thursday evening, GOP challenger Dino Rossi called Murray to congratulate her when it became apparent that the three-term incumbent was gaining more and more votes as mail-in ballots were tallied. Most of those were coming from predominantly-Democratic King County (Seattle).

Though the counting is not finished, it became increasingly apparent that Mr. Rossi would inevitably lose – the third time he’s lost a statewide race (including two for governor, the first of which was determined months after the election by two recounts and a state Supreme Court case).

Murray, now the fourth-ranking Democrat in the Senate, started a political career on her local school board, moving up to the state Senate before running for the US Senate as a “mom in tennis shoes” – the jibe of a political opponent which she adopted.

Murray is moderate to liberal, winning high ratings from abortion-rights and environmental groups, and she supports the interests of the liberal Americans for Democratic Action (ADA) 95 percent of the time.

She’s on the Appropriations subcommittees for defense and veterans affairs, important posts for a politician in a state with major military facilities. Though she gets high ratings from associations representing military officer and noncommissioned officers, she was one of 21 Democrats who voted against Senate authorization for invading Iraq.

This week’s election was the closest Murray has come to defeat since first running for the Senate in 1992. She won by 8 percentage points then, and has won by double digits in her two reelection bids.

But in the early hours after the polls closed Tuesday, Rossi and Murray were separated by only about 14,000 votes – no more than one percentage point. By Thursday evening, her lead had grown to about 46,000 (51-49 percent) as it continued to increase. At that point, Rossi conceded.

Farther to the northwest in Alaska, meanwhile, it’s likely to be days if not weeks before the outcome of the US Senate race is official.

Republican incumbent Lisa Murkowski lost the GOP primary to tea party favorite Joe Miller. Rather than accept defeat, she ran as a write-in candidate, making it a three-way race with Miller and Democrat Scott McAdams.

At this point, with write-in ballots yet to be examined and absentee ballots still arriving from remote regions, “write-in candidate” is leading with 41 percent of the vote, with Mr. Miller second at 34 percent and Mr. McAdams trailing with 24 percent.

Presumably, most of those write-ins are for Murkowski, but that’s not guaranteed. Anybody’s name can be written in – including Joe Miller’s. McAdams has conceded.

As officials get ready to examine individual ballots by hand, both Murkowski’s and Miller’s camps have enlisted lawyers to defend or challenge ballots.