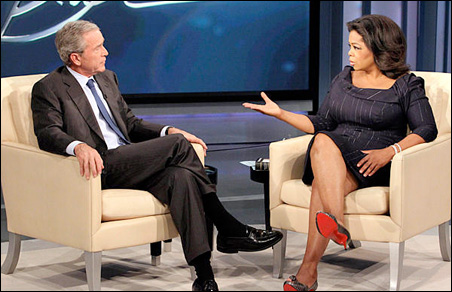 BOSTON — George W. Bush’s appearances this week on NBC, Oprah, and Jay Leno underscore how his memoir “Decision Points” is geared toward an American audience. But the former president is also attracting international attention, with media worldwide focusing on aspects of the book specific to their regions.

Ukraine’s The Kyiv Post, for example, highlights how Russian leader Valdimir Putin, after he met Mr. Bush’s Scottish terrier Barney, introduced the American president to his “big black Labrador.” Bush writes that, “With a twinkle in his eye, Vladimir said, ‘Bigger, stronger, faster than Barney.’ “

While Russian media did not appear to be covering the interaction, or Bush’s memoir, which will be released Tuesday, his reflections on relations with Israel, decision to start two wars, and interactions with world leaders are all sparking discussion in much of the international press.

In Britain, The Guardian noted that Mr. Bush’s memoir comes nearly two months after the release of former Prime Minister Tony Blair’s memoir, “A Journey,” which was also published by Random House. The Guardian uniquely compares their cover art:

“The cover of Bush’s memoir shows the 43rd president – who has, according to the publisher, spent almost every day writing the book since leaving the Oval Office – in motion, hand in pocket, gazing thoughtfully into the middle distance – possibly as he makes one of those 14 all-important decisions. Blair’s jacket takes a close-up approach, with the relaxed air of the former prime minister’s open-necked shirt at odds with his fixed almost-grin.”

Reaction in Israel and Middle East
Israeli media, meanwhile, were buzzing with Bush’s revelation that in 2007 he refused then-Prime Minister Ehud Olmert’s request to bomb a suspected nuclear facility in Syria. Instead, Israel launched a preemptive strike, which Bush says he did not “green light. … [Mr. Olmert] had done what he believed was necessary to protect Israel.”

According to The Jerusalem Post, Bush felt the Israeli strike on Syria vindicated the country after its 2006 war against Hezbollah. An analysis in Haaretz concluded that “Bush’s book should thus be read as a lesson for the future: The Americans cannot appear to be doing Israel’s bidding. Precise intelligence is necessary. And whatever can be done secretly is better than what explodes thunderously.”

The reviews in Lebanese newspaper The Daily Star and Qatar newspaper The Gulf Times also focus on the Israeli strike on Syria. Syrian media, which are tightly controlled by the government, lacked any mention of the attack. Syria ally Iran also avoided the subject, with the state-run Press TV instead offering a short article that says Bush is unlikely to be tried for war crimes in Iraq.

Sami Moubayed, the editor-in-chief of Syria’s pro-government Forward Magazine, writes in the Gulf News that “Decision Points” reveals the lack of remorse of “this controversial leader, loathed throughout the Arab and Muslim world.”

“Certainly nobody else managed to singlehandedly damage America’s image in all four corners of the globe…. All ‘Decision Points’ really tells us is that Bush apparently had no moral problem with prisoners being tortured, in either Guantánamo or Abu Ghraib,” Mr. Moubayed writes.

Still others seemed particularly drawn to Bush’s reaction after rapper Kanye West said “George Bush doesn’t care about black people.” In his memoir, Bush calls the moment “an all-time low” in his presidency.

“An all-time low?” says an op-ed in Jamaican newspaper The Gleaner. “I would have thought that the lowest point in Bush’s presidency was when that Iraqi journalist tossed those size-10 shoes at him in December 2008. The sitting-duck president had to duck really low to avoid those weapons of mass destruction. Yet, the president is all riled up over Kanye’s puerility.”