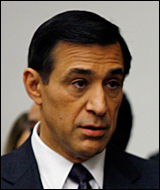 WASHINGTON — President Obama and the Democrats have just endured one painful political tsunami. Now they’re bracing themselves for another: Darrell Issa.

The House Republican from California is set to take over the chairmanship of the House Oversight and Government Reform Committee, and he has made no secret of his love of hearings. He wants hundreds of them – one or two a week, times seven subcommittees, times 40 weeks, he told Politico. That’s at least 280 hearings a year. By way of comparison, Rep. Henry Waxman (D) of California held 203 oversight hearings in two years when he chaired the committee during President George W. Bush’s last two years in office, Politico notes.

Representative Issa doesn’t want to bother with sideshows, like Roger Clemens and steroids. He wants to go after the executive branch.

“We need serious reforms within the federal bureaucracy, and I will target areas of waste, fraud, abuse, and mismanagement to ensure that we are better stewards of taxpayer dollars,” Issa said Tuesday on CNBC.

In September, Issa’s office put out a report listing the types of investigations he would launch next year, regardless of which party won control of the House in November. But now that the GOP is taking over, you can take his list to the bank.

Issa knows his committee can’t handle this big task itself, and he hopes to farm out inquiries to other congressional committees. Issa’s fellow Republicans are delighted by his energetic posture.

But could he go overboard? Absolutely. Last month, Issa told conservative talker Rush Limbaugh he thought Mr. Obama was “one of the most corrupt presidents in modern times.” On Monday, he took back that comment on ABC’s “Good Morning America” and again on CNN.

“Do I think the president is personally corrupt? No,” Issa told CNN. “I should never have implied that or created that in a quick statement on a radio call-in.”

Issa has also walked back suggestions he might try to impeach Obama. When Rep. Joe Sestak (D) of Pennsylvania said earlier this year that the White House had offered him a job to get him not to run for the Senate, Issa suggested that was an “impeachable” offense. Now Issa says impeachment isn’t on his agenda.

“Not a chance at this point,” Issa told Bloomberg. “I don’t see it happening.”

For Issa to avoid overreaching, he needs to stick to substantive public-policy issues and not go overboard in search of scandal, says John Pitney, a political scientist at Claremont McKenna College in Claremont, Calif.

“The economic stimulus package is big enough to sustain a whole bunch of investigations all by itself. What happened to all the money?” says Mr. Pitney, a former Republican staffer. “It’s also appropriate to go after cases of abuse and misconduct. But it’s important not to go off on witch hunts, such as we saw in the Clinton years.”

Pitney names Representative Waxman as a good role model. “He was a tough, fierce opponent, but he was always extremely substantive,” Pitney says. “When he brought witnesses before the committee, people paid attention.”