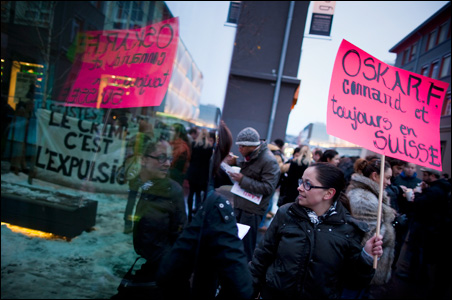 REUTERS/Valentin Flauraud
People protest after Switzerland voted on an initiative to expel foreigners.

PARIS — Swiss voters have agreed to expel foreigners convicted of crimes ranging from murder to welfare fraud, without appeal, in the latest example of a sweeping set of popular antiforeigner measures around Europe.

Some 53 percent of Swiss voted for a “Deportation Initiative” brought by the far-right Swiss People’s Party (SVP) a year after it engineered an initiative banning the building of minarets. Senior European Union officials decried a new “populist surge” on the continent.

Swiss voters were stirred by pro-deportation posters showing a white sheep kicking a black sheep off the map of Switzerland. The vote is a “first step … towards greater security,” SVP leaders said in a statement. The party appears to be in a strong position ahead of elections in 2011.

The vote to deport came over and against the views of many elected Swiss politicians, who seemed unable to rally against it.

On Monday, Swiss editorial positions warned against the nation being ruled by referendum or a new “dictatorship of the people.” The Geneva-based Tages-Anzeiger stated that, “The image of a cosmopolitan, tolerant, and internationally engaged country has taken a further battering.”

The Zurich-based Blick daily took a center line: “We are talking of 500 to 1,500 foreign criminals who would be expelled every year. Almost 2 million foreigners live here peacefully and contribute to our well-being. We should not lose sight of this proportionality.”

Automatic deportation
The Deportation Initiative requires local judges to automatically deport persons of foreign origin whether or not they were born in Switzerland – and deportations apply to major crimes as well as lesser crimes, such as drug trafficking or fraudulent acceptance of unemployment benefits.

Such terms appear to violate some of Switzerland’s treaty accords, including deporting persons to states that practice torture or abuse, as Amnesty International noted in a broadside against the measure.

The Swiss far-right, however, appealed to a public feeling of insecurity, the loss of traditional Swiss culture, and the payout of generous welfare benefits to immigrants.

Swiss Justice Minister Simonetta Sommaruga said late Sunday that the “majority of the voters have sent a clear signal that they consider foreign criminality to be a serious problem.”

The European far right has been changing the political landscape with a strategy that effectively leaps over old taboos against singling out foreigners – and portrays political elites as overly tolerant and out-of-touch. New anti-immigrants “movements” in the Netherlands by anti-Islam politician Geert Wilders, and in Denmark, Austria, and Sweden, among others, have made substantial inroads.

Switzerland’s population is now 20 percent foreign-derived; many minorities come from African and Arab states. Swiss urban areas have become notoriously less safe in recent years and SVP leader Christian Blocher singled out immigrants ahead of the Swiss vote by stating that they make up 22 percent of the population but account for 54 percent of the crime in Switzerland.

Swiss vote tallies showed strongest acceptance of the measure in German-speaking, rather than French-speaking, cantons; the highest pro-deportation figures came from rural areas with the fewest numbers of minority populations.

While Switzerland is not part of the European Union, it shares many legal treaties with Brussels, and is considered a social bellwether.

EU Commission president José Manuel Barroso took note of a sour mood in Europe regarding minorities on Saturday, reports the Washington Post. Mr. Barroso told French1 radio that, “I see societies that have a great tradition of openness and democracy where a nationalist, chauvinist, xenophobic, sometimes even a very, very aggressive populism surge is swelling…. Populism is the manipulation of fears with irrational arguments, but it works sometimes.”