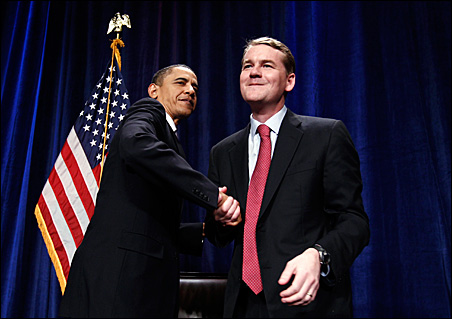 Pre-election polls and pundits have spoken. What’s left is getting voters to the polls – a must in all states, but nowhere more so than in Colorado, where lavishly funded races for Senate, governor, and at least three House seats are coming down to the wire.

“To be short and to the point: We have a lot of work to do,” said Sen. Michael Bennet (D) of Colorado, at a Sunday get-out-the-vote rally following a 72-hour bus tour. He is narrowly trailing challenger Ken Buck (R) in a race too close to call.

“Knock on every single door and make phone calls. When you do that, that’s what’s going to make a difference in this race,” he said.

More than just another battleground state, Colorado has played a key role in the narrative of the Obama administration and its political strategy. The president accepted the Democratic nomination at Denver’s Invesco Field. He signed his first major domestic priority – a $787 billion stimulus plan – in Denver.

Colorado also evolved a formidable political model in rallying a network of progressive groups, funded by big donors, to share databases and coordinate strategy and get-out-the-vote efforts – a model subsequently adopted by the Democratic National Committee and replicated in other battleground states. But the so-called Colorado model faces a formidable challenge in a year when public opinion has swung so strongly against the Obama administration and Democratic incumbents. It’s facing its greatest test in turning out voters in an election cycle expected to produce big gains for Republicans.

“This model has proved successful in down-ballot races in ways pollsters never thought it could,” says Adam Schrager, coauthor with Rob Witwer of “The Blueprint: How the Democrats Won Colorado.”

“Progressives here spent hundreds of millions to build in effect a political levy – to maximize good when things are good and to minimize losses when things are bad. The question in this election is: Can this infrastructure hold up to this very, very bad climate [for Democrats],” he says.

Democrats hope to close the gap with a formidable ground game that includes both party efforts and a strong assist from unions and progressive outside groups. With frustration against government running so high, union organizers have had to focus on rebuilding enthusiasm among their own members this cycle, as well as the larger voting public.

“We need to make sure our members don’t forget how bad it was [in Republican administrations], no matter how frustrated they are,” said Trish Gilbert, secretary-treasurer of the National Air Traffic Controllers Association at a get-out-the-vote rally sponsored by Colorado AFL-CIO on Saturday.

The AFL-CIO’s grass-roots Labor 2010 program is targeting 70 House races, 18 Senate races, and more than 300 state legislative races in 26 states. In Colorado, AFL-CIO volunteers say they will have contacted 189,000 targeted union members and their families by Nov. 2.

The tea party wave and the millions of dollars that outside conservative groups are pouring into Colorado races are a special challenge this cycle, union organizers say. “Members at worksites can provide a counterweight to the message bombs that outside, far-right groups are putting out there,” says Phil Hayes, political and legislative director for Colorado AFL-CIO. “But we don’t have enough people in media presenting the facts.”

Hispanic groups such as Mi Familia Vota have been on the ground for months talking with “infrequent Latino voters” in Colorado, Texas, and Arizona in a bid to boost participation at the polls. In Denver, Spanish radio stations are fielding calls from voters who missed early voting and offering rides to the polls. “The pollsters will be surprised on Nov. 2,” says Zee Ferrufino, owner and CEO of the KBNO Spanish Radio Group. “Our people care about jobs. They’re disappointed with Obama, but at the same time they understand that he hasn’t had enough time.”

With so much spending by outside groups undisclosed in Campaign 2010, it’s not clear which party has the stronger ground game. “This is the first time we’ve had equilibrium with Democrats in outside spending,” says Dick Wadhams, Colorado State Republican Party chairman. “They’ve had the advantage for years, and unions are still the biggest spenders.”

Mr. Wadhams predicts that when the dust settles, Colorado will have delivered a “total rebuke” to the Obama administration, especially important because it comes from a state that the president so clearly valued. “Democrats have been touting Colorado and the Rocky Mountain West as blue. Now it’s going to be totally reversed,” he adds.