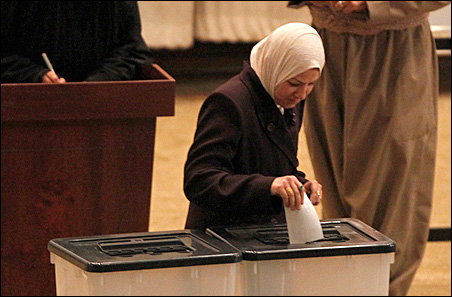 REUTERS/Thaier al-Sudani
Members of the new Iraqi Parliament voted to elect a parliament speaker on Thursday.

BAGHDAD — Iraq’s Parliament ended a political crisis Thursday that left the country without a new government for a record eight months, but the tumultuous first session laid bare the deep divisions with the emerging governing coalition.

Lawmakers, ordered back to work by a federal court, elected a speaker and re-elected Kurdish leader Jalal Talabani who called on Prime Minister Nouri al-Maliki to head a new government in line with a deal reached by political leaders before the session.

In a series of negotiations in Baghdad and Erbil, the Kurds agreed to back Maliki’s Shiite bloc, with Talabani keeping his post as president in the coalition government. Ayad Allawi, whose secular, mostly Sunni Iraqiya coalition won two more seats than Maliki’s bloc in the March elections, was relegated to the post of a powerful new strategic council.

Maliki now has 30 days to negotiate the cabinet posts that will make up the government.

After beginning almost three hours late due to last-minute negotiations, the five-hour session was also marked by a dramatic walkout by Iraqiya, the main Sunni-backed bloc, in protest over what it said was the coalition partners’ decision to renege on an agreement hours after it was signed.

They claimed that their rivals in the fragile coalition government had originally agreed to lift a ban on several Iraqiya candidates accused of Baathist ties, but then rescinded the offer.

“We will not participate in a government that started out with a coup in the first parliamentary session,” Iraqiya spokesman Haider al-Mullah told reporters at parliament.

The ban was imposed by a controversial deBaathification commission headed by Shiite politician Ahmed Chalabi, and disbanding the commission has been one of Iraqiya’s key demands in joining the new governing coalition.

The Iraqiya walkout then deprived Talabani of the two-thirds vote he needed to remain in his post, prompting another round of voting before he was finally declared president. As Talabani took the oath, putting the seal on a new government, celebratory gunfire broke out in some neighborhoods. In Talabani’s stronghold of Sulaimaniya, the gunfire was mixed with fireworks.

Including the Sunnis has been a key goal in creating a broad-based new government that could ease sectarian tensions in the country. Sunnis boycotted the first Iraqi elections in protest against what many believed was their marginalization in the post-war, Shiite-dominated Iraq.

The new government, which owes its existence partly to the political movement of hard-line cleric Muqtada al-Sadr, is seen as more potentially pro-Iran than the previous one.

The new strategic council, a 20-member body that will include security and political leaders, is meant to act as a check on the powers of the prime minister. Maliki, whose Shiite bloc won two fewer seats than Allawi’s coalition, has faced strong opposition even from his Shiite partners over accusations that he has abused his powers.

The US along with ordinary Iraqis, had been desperate for a government to be formed. President Obama and Vice President Joe Biden in recent phone calls had tried to persuade Talabani to step aside to give the president’s post to Allawi, in an unsuccessful effort to break the deadlock.

Allawi had argued that he should be prime minister since his bloc won the largest number of seats, although far from enough to form a majority. Even as the session began, spokespeople for Iraqiya said they had been cheated of the victory that had been theirs and vowed they would hold their coalition partners to promises they had made on the debaathification commission and other issues, including releasing prisoners.

Although the new arrangement gives Iraqiya a potentially significant role in government, it essentially sidelines Allawi – a bitter disappointment to his secular and Sunni followers who believed he would usher in a new era.

— Sahar Issa contributed to this report.