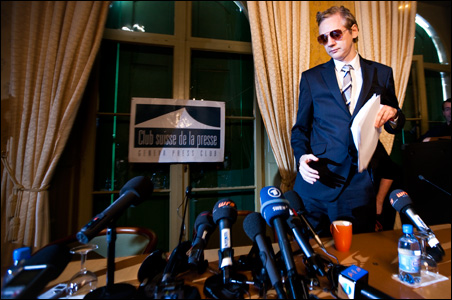 REUTERS/Valentin Flauraud
Julian Assange, founder of WikiLeaks, arrives for a news conference at the Geneva Press Club in Geneva.

SYDNEY — Australian Prime Minister Julia Gillard lambasted the leaking of classified US documents as “grossly irresponsible” and “illegal” Thursday as the government braced itself for the publication of 1,500 diplomatic cables relating to Australia.

Ms. Gillard told 4BC Radio that Australian security officials were combing through the documents – released via the whistleblowing site WikiLeaks – to assess the implications. “I absolutely condemn the placement of this information on the WikiLeaks website,” she said. “It’s a grossly irresponsible thing to do, and an illegal thing to do.”

The fall-out from “Cablegate” is being watched with particular interest in Australia, birthplace of the website’s founder, Julian Assange, although the country itself – a close ally of the United States – has not yet figured prominently in the documents.

According to the Australian Broadcasting Corporation (ABC), US Ambassador to Australia Jeffrey Bleich has briefed Australian Defense Minister Stephen Smith on 1,500 cables that mention Australia. While their contents have yet to be divulged, one political commentator, David Penberthy, says they would be of considerable interest if they related to Australia’s military role in Iraq or Afghanistan.

The leaks story has received extensive coverage in Australia, with Mr. Assange’s nationality – he was born in Queensland and studied at the University of Melbourne – giving it extra punch. His mother, Christine, who recently moved back to Queensland to escape media scrutiny, gave two interviews this week before going to ground.

She said she was distressed by an International police agency (Interpol) notice issued for Mr. Assange’s arrest, on charges of raping two women in Sweden, and told Queensland’s Courier-Mail newspaper: “He sees what he’s doing as doing a good thing in the world – fighting baddies, if you like.”

Not all his compatriots agree. “The jury is out on whether WikiLeaks’ Julian Assange is a whistleblowing hero or dangerous anarchist,” the Sydney-based Daily Telegraph wrote. “Is he an information warrior using the internet’s reach and anonymity to expose high-level global corruption … or is he an anarchist exploiting the noble cause of whistleblowing for the sake of self-promotion?”

To the disappointment of some Australians, the sole mention of the country to date in the leaked documents describes it as a “rock solid,” [as an ally] but not influential in the diplomatic arena.

David Burchell, an expert in Australian politics based at the University of Western Sydney, doubts the other cables will be any more explosive – or damaging to national security. “I don’t think there’s any particular reason for Australians to be quaking in our boots,” he says.

Mr. Penberthy, editor of a news commentary website, The Punch, says: “They could relate to our commitment to the war in Iraq or Afghanistan, or to our relationship with neighbors such as Indonesia. But we’re not a global heavyweight and I can’t imagine there would be anything earth-shattering in them.”

He believes Australians are as mystified as everyone else about Assange’s motives. “I think they are just puzzled and bemused by this weird, blonde-haired bloke from Australia who has ended up terrorizing the entire Western world.”