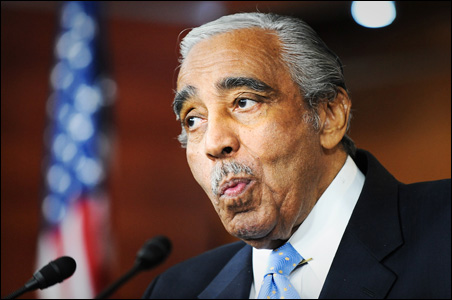 REUTERS/Jonathan Ernst
U.S. Representative Charles Rangel (D-NY) pauses as he responds to a question during a news conference after his punishment for ethics violations on Capitol Hill in Washington.

WASHINGTON — In a rare move, the House on Thursday voted, 333 to 79, to censure 15-term Rep. Charles Rangel (D) of New York for 11 ethics violations ranging from failure to disclose income to violating House gift bans.

In a solemn moment, Mr. Rangel stood silently, as Speaker Nancy Pelosi, looking anguished, read out the 11-line censure resolution, the first delivered in this chamber in 27 years. Rangel became the 23rd congressman in the history of the House to be censured.

The vote requires Rangel, former chair of the powerful Ways and Means Committee, to pay restitution for any unpaid estimated taxes on income from properties in the Dominican Republic and to provide proof of payment to the ethics panel.

Censure is the strongest congressional disciplinary action short of expulsion. It has been used in the past to sanction members for assault on another member (1856), treasonous conduct (1864), selling military academy appointments (1870), bribery (1973), payroll fraud (1979) and, most recently, sexual misconduct with House pages (1983).

“The decision to recommend [censure] was not made lightly,” says ethics panel chair Zoe Lofgren (D) of California. “It brought discredit to the House when this member, with great responsibility for tax policy, did not pay his taxes for many years,” she added. “We follow precedent, but we also set it.

Rangel urged House members to reject censure in favor of the lesser punishment of a reprimand, which could have been delivered privately or in a letter. “I have made serious mistakes,” he said in a statement before the vote. “I brought it on myself, but I still believe that this body has to be guided by fairness.”

Supporters, including many in the Congressional Black Caucus and New York delegation, backed that call. “Censure is an extremely severe penalty,” said Rep. Peter King (R) of New York, one of two Republicans to vote against censure. “Why are we being asked to reverse more than 200 years of tradition and precedent?”

But tolerance for corruption has dropped in the House, especially after the issue figured so prominently in handing control of the House to Republicans in the 1994 elections and back to Democrats in the 2006 vote. Speaker Pelosi came into office pledging to “drain the swamp,” and the Rangel affair was an embarrassment leading up to the 2010 vote, which flipped control of the House back to Republicans.

“Within the culture of the House, being reprimanded or censured is serious, and Charlie is going to feel that very hard, because he is an institutional creature,” says former House Historian Raymond Smock, director of the Robert Byrd Center for Legislative Studies in Shepherdstown, W.V. “He appreciates the House, even though he has brought some embarrassment to it.”

Addressing the House after the censure vote, Rangel said: “I know in my heart I am not going to be judged by this Congress, but by my life, my activities, and my contributions to society.”