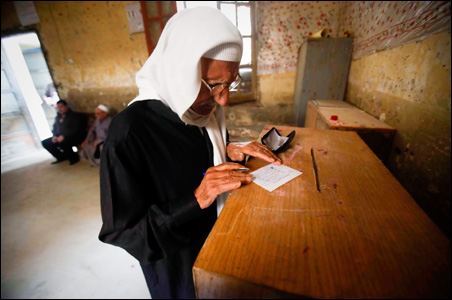 REUTERS/Mohamed Abd El-Ghany
An Egyptian man fills in his ballot at a polling station during the runoff of the parliamentary elections in Cairo.

CAIRO — The runoff election to fill the seats in Egypt’s parliament Sunday was hardly a nail biter: after a fraudulent first round of voting last week and a decision by opposition parties to withdraw from the race, the result was largely a foregone conclusion.

While the final tally will not be released until later this week, it appears that the ruling party will claim about 97 percent of the seats in parliament, up from about 73 percent following the 2005 election, which was itself marked by ballot stuffing and intimidation of voters in favor of the ruling National Democratic Party. That has left the largely rubber-stamp parliament without even the fig-leaf of “opposition” that Egypt’s leaders have traditionally pointed to when claiming that the country is not, in fact, an autocracy.

The result has repudiated the strategy of opposition groups like the Muslim Brotherhood to slowly accumulate political representation through elections in the hopes that it would eventually amount to something. A signal has been sent that whoever runs for president in elections scheduled for September 2011 – President Hosni Mubarak will be 83 years old by then – that the opposition and voters will have no say in the outcome.

The next battlefield for the opposition may be the courts. Mustapha Kamel Al Sayyid, a political science professor at the American University in Cairo, says opposition groups could wage a successful battle in Egypt’s somewhat independent judiciary.

“Using the courts could be very embarrassing for the regime because opposition parties are on serious ground when they contest the legality of the election,” he says. “I think they will call for the dissolution of the People’s Assembly, hoping that there would be new elections … and in these elections they would be capable of getting more seats.”

Egyptian courts already ruled to invalidate elections in a number of districts, but the High Elections Commission – controlled by the government – ignored the rulings. Dr. Sayyid says the opposition can make effective legal arguments for dissolving parliament or at least holding new elections in some districts. There is precedent for such a move: courts dissolved Egypt’s parliament in 1987 and 1990 because of election violations.

An embarrassingly large majority
Last week’s first round made clear that the regime was intent on dominating, and reducing the size of the opposition in parliament. Poll monitors and representatives for opposition candidates were routinely denied access to voting centers across the country, and those election monitors who did gain access reported ballot-box stuffing and other irregularities, while government forces used violence and intimidation to keep voters away in some cases.

The result was that the Brotherhood, Egypt’s largest opposition movement, won no seats outright, and the secular and free-market-oriented Wafd Party, won only two. Brotherhood candidates run as independents to avoid the government’s ban on religious parties.

The consensus among many analysts is that the regime overreached, delivering an embarrassingly large majority when it had actually intended to only cut down the opposition representation to about 50 seats, making a show of fairness.

Ahead of the election, a senior government official who asked not to be named predicted an electoral massacre for the Islamist Brotherhood, but the emergence of a bloc of seats for the secular Wafd party as a meaningful opposition. The Wafd have far less popular support than the Brotherhood and are easier for the regime to control as a result.

After the opposition was shut out in the first round, many speculated that the regime intended to “fix” its problem in the second round by allowing more opposition candidates to win, giving the parliament a veneer of legitimacy. But it never got the chance – the Brotherhood and Wafd announced they would pull their candidates from the runoff, provoking strident criticism from NDP officials.

NDP vs. NDP
That left the ruling party competing largely against itself on Sunday, though some renegade members of Wafd reportedly still contested the elections. Out of the 283 seats contested in the second round, ruling party candidates were running against each other in 114. Most of the independents in other races were NDP loyalists. The vote was again plagued by violence and fraud, in many cases with security forces sitting on the sidelines while supporters of rival NDP candidates battled each other, says Sherif Abdul Azim of the Egyptian Association For Community Participation Enhancement (EACPE), which sent 300 election monitors to the polls on Sunday.

In some districts monitors reported rigging in favor of the leftist Tagammu opposition party, which decided to stay in the race – supporting the theory that the government intended to allow opposition candidates to win in the second round to bolster its legitimacy. Mr. Abdul Azim said that in at least two of the six races in which Tagammu was fielding candidates, the government intervened in the favor of the opposition party. In one race, the NDP candidate withdrew, claiming rigging in favor of his Tagammu opponent.

“This is an attempt to legitimize the coming parliament,” said Mr. Abdul Azim. “[The regime] is trying to save what they screwed up in the first round.”

Tensions over succession
President Hosni Mubarak, who is 82, has not yet announced whether he will run for reelection next year, but is widely believed to be grooming his son Gamal to take power. The crushing results of the election may have been a consequence of tensions within the NDP over succession. The result led to discomfort among among the “young guard” of NDP members around Gamal.

This group, largely composed of men from banking and business backgrounds, have reached out to American political consultants for aid in positioning the NDP as technocratic reformers, devoted to a slow, eventual opening up of the political system after an era of rapid market liberalization.

Few of them have military backgrounds, putting them at odds as a matter of style and approach, if not ideology, to the older generation like the senior Mubarak and the secretive retired and active officers who are believed to have strong influence over how Egypt conducts its affairs. To some in Egypt, the rule of State Security and the police in swaying the results of the election was a reminder to the young guard that they still call most of the shots in Mubarak’s Egypt.

With the possibility of succession looming, Egypt’s opposition will intensify protest movements, says Sayyid, even as it seeks to regain its place in parliament through new elections. The Muslim Brotherhood, for one, is unlikely to abandon politics altogether, says Ibrahim El Houdaiby, a former prominent member of the Brotherhood.