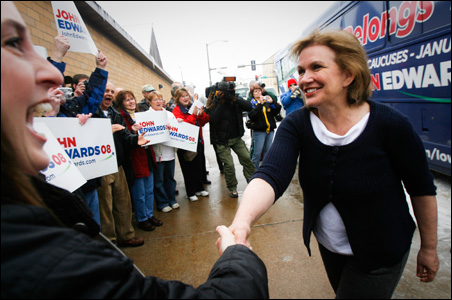 Elizabeth Edwards, who helped bolster the political career of her husband, John Edwards, faced tragedy and heartache with a belief in, as she said in her final note, “the power of resilience and hope.”

“She was an inspiration to all who knew her, and to those who felt they knew her,” said Vice President Joe Biden in a statement.

Ms. Edwards’ public battle with cancer – a diagnosis revealed the day Mr. Edwards lost his vice presidential bid as part of the 2006 Democratic ticket with John Kerry – earned the lawyer and mother of four a unique measure of respect, sympathy, and visibility for a politician’s wife. She was widely seen as a loyal partner and trusted adviser determined to fight through personal hardships, as the couple had with the death of their 16-year-old son, Wade.

But her husband’s 2006 affair with a campaign videographer, which resulted in the birth of a child, revealed her inner struggles publicly. She eventually admitted that she knew about the affair even as she continued to support Edwards through his failed 2008 bid for the presidency. The couple separated in 2009, though Mr. Edwards was at her bedside on Tuesday morning.

Asked in 2009 whether she still loved John, Edwards answered, “You know, that’s a complicated question.”

Edwards faced allegations in the book, “Game Change,” that there was a wide disparity between her public and private personas.

“Mrs. Edwards …. reviewed [her husband’s] television advertisements and major speeches, helped pick his lieutenants, joined internal debates over tactics and strategy, and sometimes dressed down, or even forced out, campaign aides she thought had failed her husband,” writes the New York Times’ Robert McFadden.

A more difficult political reality, as explained by campaign insiders, is that her popularity – especially after announcing her diagnosis – threatened to upstage her campaigning husband on the stump.

But to many women, especially, Edwards’ ability to cope with tragedy and betrayal while facing illness – and her willingness to talk about her experience on shows like “Oprah” – came to symbolize a bold brand of grace under fire that deepened, for many, the tragedy of her passing.

“She was not a Pollyanna, she looked [her husband’s affair] in the face, talked about it with people, and didn’t seem to be bitter in public,” says Pat Hawkins, a regional director for the Democratic Women of North Carolina. “She was trying to present a good example for her daughter and for all the other women who find themselves in these terrible situations.”

As North Carolinians recalled Edwards’ life today, one fact stuck with Ms. Hawkins. Despite Edwards’ anger with her husband, she met his child on Christmas last year, explaining that she didn’t want the girl to grow up believing she was not part of a broader family.

Edwards posted a note on Facebook on Monday. “I have been sustained throughout my life by three saving graces – my family, my friends, and a faith in the power of resilience and hope.”

Elizabeth Edwards, to many, embodied grace under fire