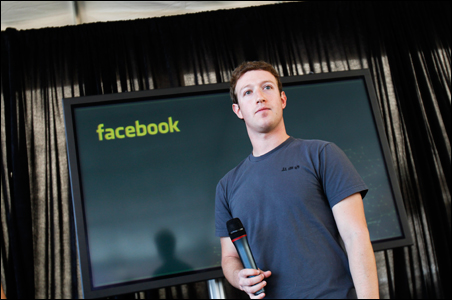 BEIJING — Mark Zuckerberg, Facebook founder and Time magazine’s Man of the Year 2010, does not spend his holidays in China like most visitors.

The terracotta warriors, it seems, can wait. Mr. Zuckerberg has spent the first few days of his winter break here meeting the leaders of China’s top technology companies, his girlfriend, Priscilla Chan, in tow.

Zuckerberg’s schedule has sparked widespread speculation that he has come to China, home to the world’s largest internet population, with business in mind. Facebook is blocked by government censors in China, and Zuckerberg’s stated goal of “making the world more open and connected” will be hard to realize if one quarter of the world’s population cannot get onto his site.

But it is not clear that Facebook would succeed in China as it has succeeded almost everywhere else in the world even if the company were allowed to operate here, some analysts say.

With nearly 100 Chinese social networking sites already operating, dominated by a handful of market leaders, “the market is very mature with a lot of good products that work well for Chinese consumers” says Bill Bishop, an internet investor in Beijing.

Google, eBay, Yahoo, and other US internet companies have all had difficulty adapting to China, and none have achieved market leadership. “That has more to do with cultural issues than government regulation” says Mr. Bishop.

If Facebook had been allowed to compete from the start, rather than suffer intermittent and then permanent inaccessibility, “it would have succeeded for the same reasons it has succeeded elsewhere” argues Kai Lukoff, an internet entrepreneur in Shanghai.

RenRen dominates a mature social media market
The largest social networking site in China, RenRen, is a clone of Facebook he points out, and RenRen’s 100 million members are testament to the power of the original.

Facebook’s chance of success in China, however, is probably a theoretical question because the site would be allowed to operate here only if it abided by Chinese internet regulations.

That would mean censoring all members’ comments and photographs to avoid politically and socially sensitive topics. It would also mean being obliged to hand over to the government information about members that the site had gathered through their registration, if the company were ordered to do so.

“The uproar if Facebook did that would be insane” says Mr. Lukoff.

“Facebook doesn’t need the hassle” agrees Bishop. “The potential danger to its brand would probably outweigh any actual value that they would bring to shareholders.”

Great Fire Wall of China blocks Facebook, Twitter
Facebook, suspect in Chinese government eyes because it offers a platform to build social networks beyond the control of the ruling Communist party, has been completely blocked since rioting broke out in the western province of Xinjiang in July 2009 among the Uyghur ethnic minority.

Twitter is also inaccessible in China, though both Twitter and Facebook can be reached through Virtual Private Networks and other tools designed to skirt the Great Fire Wall that censors have erected around the Chinese internet and its 420 million users.

Government controls have created a local protected eco-system in which Chinese social networking sites prepared to censor their members’ posts according to government directives have flourished.

The stiff local competition, not to mention the censorship, would appear to rule out any Facebook assault on the Chinese market, despite Zuckerberg’s personal curiosity about China, his efforts to learn Mandarin, and the Chinese origins of his long-term girlfriend.

Says Lukoff: “Zuckerberg will figure out while he is here, if he hasn’t figured it out already, that for the foreseeable future, China is a no go for Facebook.”