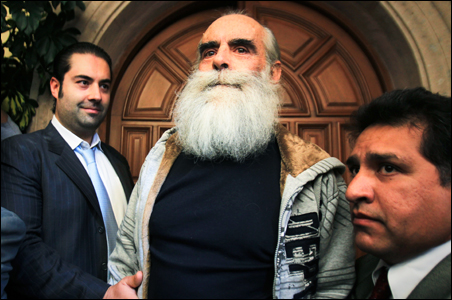 MEXICO CITY — Ending the saga of one of Mexico’s most high-profile kidnappings in recent history, “El Jefe Diego,” a national figure and ruling-party politician missing for seven months, was freed Monday.

Local media received photos of Mr. Fernández de Cevallos throughout his captivity, some of them with him blindfolded and bare-chested, in an apparent attempt to put pressure on his family to pay ransom. His case has captivated the nation. Last month, reports of his release, which turned out to be false, were spread over the Internet and on the front page of the local newspaper El Universal. Monday, his freedom finally arrived.

“I am fine, thank God,” said Fernández de Cevallos, also a former PAN senator, from outside his home in Mexico City. “I am strong and my life will continue being the same.”

While drug-trafficking violence dominates news of security in Mexico, as the government wages war against drug groups that are responsible for more than 30,000 murders in four years, it is kidnapping that terrifies most ordinary Mexicans. The numbers are up dramatically, and this case, despite its happy ending, will likely do little to restore the overall faith of Mexicans that the state is making the country a safer place.

“Impunity allows these groups to operate…. Today it is Diego, tomorrow it could be anyone,” says Jose Antonio Ortega, the president of the Citizen’s Council for Public Security and Criminal Justice in Mexico City. “We are all exposed.”

In May, days after the car of Fernández de Cevallos, who ran for president in 1994, was found near his ranch, his family asked authorities to back down from the case so that the family alone could negotiate his freedom. The family reportedly paid more than $20 million to secure his release, though that amount is not confirmed.

Mr. Calderón’s office released a statement congratulating the family and also explaining its decision to back off the case. “At all times, the federal authorities respected the decision of the family of the ex-PAN legislator, with the aim of preserving his safety and enabling his return home,” it read. “The Attorney General’s office will continue with investigations to apprehend those responsible and bring them to justice.”

“Those seven months were hell,” Fauzi Hamdan, a former legislator acting as family spokesperson, said. He provided no other details.

A survey by Mitofsky Consulting carried out in October throughout Mexico showed that 83 percent of those surveyed believe that crime is worse than it was a year ago. Fifty-five percent said that what they feared most is kidnapping, up slightly from the year before.

The NGO Mexicans United Against Crime released a national report of crime statistics last year. While the number of incidents of crime overall, including robbery and murder, was up steadily from 1997 to 2009, kidnappings are up dramatically. In 2006, the study reveals 595 reported kidnappings, rising to 1,125 last year. Many analysts say that drug-trafficking organizations are increasingly becoming involved in kidnapping and other illegal networks as the government clamps down on their money-making proceeds from narcotics.

Mr. Ortega’s group says that as of Aug. 23, 163 of those kidnapped this year have been killed – a trend that puts the number of those killed during kidnappings on target to have doubled from the year before. The spike is attributed to the kidnapping and execution of 72 Central American migrants in northern Mexico this year. But all numbers must be evaluated with caution in Mexico, since the numbers of those who fail to report crimes is so high across the country, Ortega says.