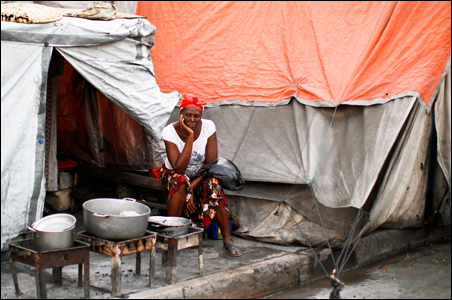 REUTERS/Jorge Silva
A woman sits outside her tent in downtown Port-au-Prince.

PORT-AU-PRINCE, Haiti — For more than six weeks last fall, a brand new obstetrics hospital remained empty and closed, its Ikea furniture still wrapped in plastic, a reminder of how far Port-au-Prince had to go to recover from the Haiti earthquake.

Meanwhile across the street, a camp with 1,500 families had no access to medical care beyond occasional visits by the Haitian Red Cross. The hospital, commissioned by Doctors Without Borders (MSF), has since partially opened.

But questions remain about why the project in the neighborhood of Delmas 33 was delayed by the government, a symbol of the bureaucracy that has stood in the way of many of the projects run by the more than 900 NGOs that descended on Haiti after last January’s earthquake, which killed 230,000 people and left 2 million homeless.

Why the delay at the hospital? The Haitian Ministry of Health said MSF didn’t have permission to build and operate it, according to the Norwegian construction company Normeca. “We are so confused, we have been working so hard and see so much need around us,” Odd Rustad, a construction manager on the project, said during a tour of the hospital on Aug. 31. The Health Ministry closed the hospital to visitors soon afterward.

On the eve of the earthquake anniversary, the capital’s streets look little different than they did 12 months ago. An estimated 810,000 people – a majority unemployed – continue to live in 1,150 camps, according to the International Organization for Migration (IOM). Delays and disagreements have stalled much of the reconstruction efforts and caused consternation to Haitians and international observers.

Government corruption
Oxfam, in a report released last week, blamed the lack of progress “on a crippling combination of Haitian government indecision and rich donor countries’ too frequent pursuit of their own aid priorities. In Haiti, power and decision making are concentrated in the hands of very few,” the report said, calling on the government to reduce corruption, especially in view of the ongoing – and contested – presidential election.

Echoing the sentiment of many Haitian citizens, Oxfam was fiercely critical of the Interim Haiti Recovery Commission (known by its French acronym, CIRH) co-led by Bill Clinton, established in the aftermath of the earthquake to coordinate reconstruction. “The Commission has failed to live up to its mandate,” Oxfam said in a press release.

Critics say the commission has delayed the approval of important projects and limited its work to areas such as temporary shelter while failing to deliver on others such as the removal of rubble.

“The idea to have donors and the government sit around a table is great, but it hasn’t worked yet,” Martin Hartberg, author of the Oxfam report, told the Monitor. “But reconstruction cannot be a donor-led process alone, it needs to start from the government.”

The commission’s work is also marred by slow delivery of promised aid. Of the $2.01 billion pledged for recovery efforts in 2010, only $1.28 billion was disbursed, according to the UN Office of the Special Envoy for Haiti, and not all of that has been spent.

“There is no real way to enforce commitment of money to recovery,” says Irwin Redlener, director of the National Center for Disaster Preparedness at Columbia University, in a telephone interview from New York. “These are promises nations just will or won’t fulfill, and many times they won’t.”

Organizations on the ground, too, need to account for their expenditures, Mr. Redlener says in response to questions on high NGO salaries and operational costs – a lot of which pay for private security and expensive cars that many feel further alienate international workers from poor Haitians.

Too many cooks in the kitchen
The overlapping mandates of myriad NGOs and the UN mission in Haiti (MINUSTAH) and an unstable Haitian government partner have added to the confusion.

“There were thousands of NGOs roaming around and you would see reporters with their trucks and behind them Haitians in the rubble and you wondered, ‘How did these reporters get on the scene and we can’t even get a search and rescue team in there?’ There was a surreal quality to it,” says Redlener.

Last January, it took several days to resolve tensions between the US military and the Haitian government over control of the airport, a delay which paralyzed rescues for days.

“After an earthquake you only really have 72 hours to save people, a decision about the airport should have been made in a couple of hours,” Redlener says. “That indecision cost an enormous number of lives.”

One year later, Haitians still need jobs, homes, and infrastructure, but they also need better and more transparent leadership that has the backing of the international community, says Redlener.

“No organization should be allowed near disaster unless they are willing to cooperate with some level of established leadership,” Redlener says, adding: “We will be in big trouble if we don’t rebuild the government and the security of the government.”

In October, when a cholera outbreak began to claim what has now reached 2,600 lives, the government authorized the hospital to become a temporary cholera treatment center.

Today, some 220 patients from the nearby camp and the city’s poorest neighborhoods occupy the hospital’s rooms as well as tents set up in the yard, says MSF program director Esteban Arriaga. Whether the hospital will ever actually be used for obstetrics, as intended, remains unknown.

“I really don’t know what will be the final decision,” Gabriel Timothée, general director of the Health Ministry, told the Monitor this week. He acknowledged misunderstandings between MSF and the Health Ministry but rejected suggestions that the delay was due to a conflict of interest.

“It was a long process of negotiations and now we are in the final phase,” says Mr. Timothée.

‘We have nothing’
As those negotiations continue, across the street from the hospital is a camp now known as “Jamaica” because of the many young boys smoking marijuana and hanging out bored between the tents.

Sitting with four women and surrounded by twice as many toddlers, 30-year-old Martine Cadet complains that nothing has improved in 12 months. The mother of four lost her home and job in the earthquake. If anything, she says, things today are worse.

“Maybe there is money in Haiti,” she says, standing by a tent that is beginning to look like a long-term home, with a lock and a civic number sprayed on the door, “but we have nothing.”

Though more than half the families living in her camp have been evacuated – some against their will – to another camp outside the city, this one remains crowded and under-serviced.

Cadet complained about the fever of the baby she was holding. Asked why she didn’t take it to the hospital across the street, she said, “that’s for those with cholera, he’s just hungry.”