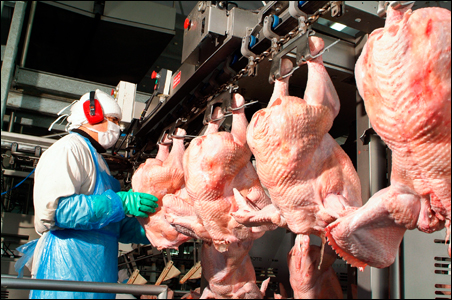 ATLANTA — A historic food safety law signed by President Obama Tuesday was sold as a way to save lives and some $152 billion a year in medical costs and lost productivity from food-borne illnesses – in return for a $1.4 billion taxpayer investment over five years.

But calling the US food chain already “99.999 percent safe,” some incoming House Republicans say the price tag may be too high. The Congressional passage of the law was seen as a defeat for the anti-deficit tea party, which helped elect a 40-member contingent of lawmakers who have vowed to take on the food safety bill as part of a larger gambit to dismantle parts of the Obama agenda, including health-care reform.

As a result of several high-profile outbreaks of illnesses linked to eggs and sprouts and other foodstuffs in recent years, a majority of the American public wants improved food safety, polls say, a fact reflected in the bipartisan passage of the Food Safety and Modernization Act through Congress late last year.

Yet media hype fueling recent recalls of eggs and sprouts sometimes under-reports a reality: While the number of food-borne illness outbreaks have more than tripled in the last 20 years, from 100 in 1991 to 350 in 2010, the numbers of Americans who get sick every year has stayed level. “Things don’t seem to be getting worse” but there has been “no significant improvement,” according to a just-published analysis of Centers for Disease Control and Prevention data by Glenn Morris, a University of Florida researcher.

In that light, some incoming Republican House appropriators are openly questioning whether spending billions to improve an already safe food chain makes sense at a time when many Americans are demanding that Washington start work on paying down the country’s $14 trillion debt.

“While it’s a great reelection tool to terrify people into thinking that the food they’re eating is unsafe and unsanitary, and if not for the wonderful nanny-state politicians we’d be getting sick after every meal, the system we have is doing a darn good job,” Rep. Jack Kingston of Georgia, who’s vying to become chair of a key subcommittee to the House appropriations panel, tells Bloomberg News.

Food-borne illnesses are responsible for some 3,000 deaths in the US each year and affect up to 48 million Americans, but the newly-signed law would take time, even if fully-funded, to impact those statistics, says Drew Falkenstein, a Seattle attorney who blogs about food safety.

Exemptions limit impact
In other ways, it may have no effect at all. For example, the most recent illness outbreak, involving salmonella-laced sprouts at a popular chain of sub shops, would likely not have been affected under the new law, since the small sprout farm at the root of the problem is exempt under the new law. A recent outbreak linked to a manufacturer of raw milk cheeses – a popular organic item – would also likely have been exempt.

The exemptions for smaller farms and operations came as part of an amendment in November that allowed the law to pass, as many Americans were concerned about the government laying a heavier hand on small, farmer’s market operations.

On the other side of the coin, in the egg recalls of last year, the problems at one large egg producer were so obvious and egregious – including 20-foot deep piles of manure stashed near the bird coops – that it’s difficult to see how current laws, if properly enforced, would not have prevented the outbreak, experts say.

Yet for its shortfalls, proponents say, the law is at its core about changing the culture of food safety enforcement in the US from a reactive to a proactive stance. Farms and food manufacturers will have to become certified under new, stricter rules, and more inspectors will be dispatched domestically and internationally to ensure that vegetables, prepared foods and imported shrimp, for example, are not laced with bacterial toxins.

Unilateral recall
As part of the most dramatic food safety overhaul since 1938, the FDA will also for the first time have power to unilaterally recall tainted goods, although the agency admits that no producer has so far refused recall demands.

“This is not legislation where you would expect to see an automatic and immediate reduction in the costs attributable to foodborne illness – we may see as many recalls next year as this year – but it sets in motion a process of improving food safety culture,” says Mr. Falkenstein. “If you don’t have the culture, the sign in the bathroom that says, ‘Wash your hands,’ is not going to mean anything. Establishing that culture is something this law is going to do.”

Parts of the law – including sections that call for a closer working relationship between government and food manufacturers – will likely have an impact even if House Republicans manage to withhold all or part of the funding. What’s more, the FDA says it already has some resources on hand to kickstart the law from increased funding over the last several years.

“The costs of not protecting food supply are far greater than cost of protecting it,” says Erik Olson, director of Food and Consumer Product Safety Programs at The Pew Charitable Trusts. “We think that all Americans have the right to sit down at dinner table and feel their meal is going to be safe.”