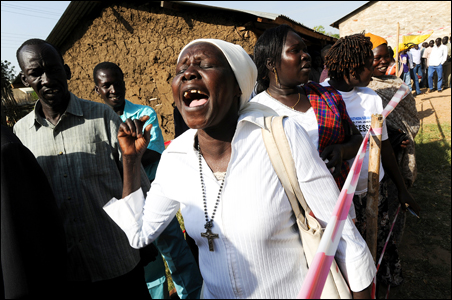 REUTERS/Tim McKulka
A southern Sudanese voter queues to vote on the first day of polling in the independence referendum at Juba.

JUBA, Sudan — The mood on the second day of voting in South Sudan’s independence referendum remained upbeat, and lines at polling stations around the capital, Juba, were again long, but the threat of further violence in the disputed north-south fault-line of Abyei cast a shadow over the optimism felt around the south on Sunday.

The people of Abyei were meant to cast their own votes of self-determination starting Sunday, a referendum they were promised when the north and south ended more than two decades of war in 2005. Instead, negotiations between the Khartoum-based National Congress Party (NCP) and the south’s ruling Sudan People’s Liberation Movement (SPLM) are stalled. But one thing is looking almost certain: Abyei won’t determine its future status – either as part of northern or southern Sudan – through the ballot box.

Although officials on the ground in Abyei reported that the situation today was calm, clashes over the past three days could herald a backslide into local conflict in the flashpoint region that Sudan watchers fear could destroy the hard work over the past six years to preserve a fragile peace.

“Everyone is concerned about Abyei,” President Jimmy Carter told the Associated Press in an interview on Sunday in Juba, noting that he had discussed the need for Khartoum and Juba to negotiate a settlement on Abyei with the African Union’s President Thabo Mbeki and US special envoy Scott Gration.

The ethnic Ngok Dinka residents of Abyei and the Arabic-speaking Misseriya herders who migrate seasonally through this fertile borderland have been at odds with each other for decades, with the enmity being at least partially driven by political interests at the north-south level.

“Abyei is being denied a referendum on self-determination in direct violation of the Comprehensive Peace Agreement. We have yet to see what ‘deal’ may be done between the SPLM-NCP on the region, and how this might be sold to local inhabitants,” said Claire McEvoy of the Geneva-based Small Arms Survey, a think tank. “To date, there is no agreement on either the future of the area, or its borders.”

When President Omar al-Bashir visited the Southern Sudanese capital last Tuesday, he issued supportive statements toward the south and expressed his desire for peaceful north-south relations regardless of the result of the southern referendum.

In Khartoum on Friday, he had harsher words for Abyei, warning of war if the Ngok Dinka attempted to unilaterally hold their own vote. “We will not accept Abyei to be part of the south,” Bashir told Al Jazeera television over the weekend. “If any party takes independent action over Abyei, that would be the beginning of a conflict.”

In this tense climate were a series of attacks which began on Friday.

Reports of these attacks vary widely. Misseriya leaders say innocent herders were attacked by Abyei area police who favor the Ngok Dinka, while southern officials say the Misseriya were armed with heavy artillery and supported by Khartoum-backed militias, and that the attacks were planned.

In a statement on Sunday, President Obama said that “violence in the Abyei region should cease,” and noted that “while a successful vote will be cause for celebration, an enormous amount of work remains to ensure the people of Sudan can live with security and dignity.”

Back in Juba, a Southern Sudanese domestic observer group, SUDEMOP, reported that the first day of polling went smoothly and that the conduct of referendum officials, including polling staff and security officers, had improved since last April’s general elections.

“I wanted the referendum because I was tired,” said Susan Riak, dressed in a colorful print dress and wearing a cross around her neck. “We lost our parents and we suffered. We want separation,” she said as she exited a polling station in a primary school in Juba.