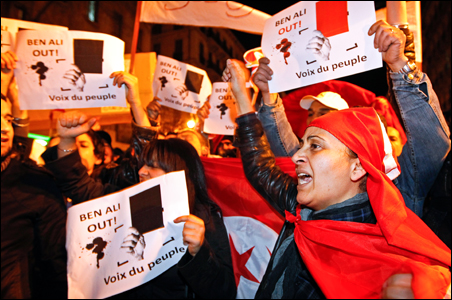 CAIRO — In an unprecedented concession to the protests that have swept across Tunisia for nearly a month, President Zine El Abidine Ben Ali said in a televised address Thursday that he would not seek a fourth term in office in 2014.

He also said he had ordered police to stop shooting protesters except in self-defense, promised to lift censorship and allow political freedom, and pledged to cut the prices of food staples.

“I have understood you,” Mr. Ben Ali said in his address. “Enough violence. … I won’t accept that another drop of blood of a Tunisian be spilled.”

But it is not clear if the population will accept his attempt at appeasement.

Rights groups say that as many as 60 people have died so far in protests that began last month when an unemployed young man lit himself on fire in desperation. The violent protests quickly grew to symbolize not only anger at rising unemployment and lack of economic opportunities, but also the corruption that pervades the ruling regime and the harsh repression of one of the worst police states in the region.

The 74-year-old president said that he would not seek to change the age limit of 75 on presidential candidates, which would make him ineligible to run in the next scheduled elections in 2014.

“There will not be presidency for life,” he said. But protesters have been calling for his immediate ouster.

YouTube accessible for the first time since 2007
Ben Ali has ruled for 23 years without any political challengers; he has eliminated political opposition and extensively censored the media.

That appeared to have changed almost immediately; activists on Twitter reported that the government’s filtering system that had blocked many websites had been taken down after the speech. YouTube became accessible to the population for the first time since the government blocked it in 2007.

But Tunisians will likely be watching for how quickly the other changes will be made, and how concrete they will be.

“This is something we have asked for for a long time and it is very good that he has promised not to put himself forward for the election,” Najib Chebbi, founder of the opposition Democratic Progressive Party (PDP) told Reuters. “The president has touched on the heart of the issue, demands for reform. That is very important and I salute that … Frankly I did not expect that, that he would touch on all these problems. “But what remains is how will this be carried out and I ask that a coalition government be created.”

Despite the Internet censorship, protesters have been able to post online videos of harsh police crackdowns on citizens. Some videos show youths pulling down the ubiquitous posters of the president and cheering as they throw them on burning debris.

Tunisian president vows to step down. But when?